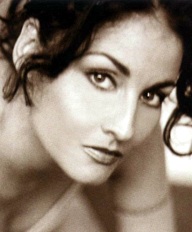 20/12/2014 : Tanja Geuder teamed with her sister Anette Pfister and with Anna Hanzalek to record song Love Will Keep Us Together under project name Lipstique.

Tanja Geuder was born in Neustadt an der Aisch (Germany) on the 13th February 1969. She has a sister called Anette and a son called Ceanu. She spent 7 years in the Roleff-King Kinderballett and learned Jazz- & Streetdance.

She started her carreer at the age of 14, releasing the single Eine Reise In's Glück, a duet with her sister. In 1993 as background-singer for Haddaway's What is love-Tour and his Ultimate Love Tour in Holland. She was also background-dancer for Culture Beat on the Serenity-Tour.

For 1994 to 1995 she joined Nancy Rentzsch and the rapper N-Dee as singer for the project 3-O-Matic. The group was under license of WEA (Produced by Dance Syndicate). She scored 3 charts hits with the singles Success, Hand in Hand and All I Want Is You. An album had even been recorded but it was never released.

In 1995, 3-0 Matic was chosen as support act for DJ Bobo's There's a Party-Tour. They also appeared live in various shows and festivals such as the Christmas Festival in 1994, and the Radio Regenbogen-Tour.

In 1996 she became the lead singer of 2 For Good, once again with Nancy. The project was produced by Axel Breitung and DJ Bobo for the records company Virgin. They released 2 hits : You and Me, and I'll Be Waiting For You. Then she gave birth to a baby. The group toured in many shows and festivals, including some AIDS-Gala, the Radio-Regenbogen-Tour, and as support-act for DJ BoBo's World in Motion- Tour in 1997. She also appeared in the video clip of Shadows Of The Night

In 1997 she had an accident during 1st week of DJ Bobo's tour and went solo under the name Tanaya. Her singles were produced by Olli's House Production. The same year, she took part to the Musical for Woehrl. Many years later, she revealed the real reasons why she left the DJ Bobo team after her accident : she was severely injured but, as no insurance accepted to indemnify her, she also had to face DJ Bobo's and Nancy's lack of empathy.

In 2000 too, she did backing vocals for the Pokemon TV-Soundtrack

Apart from her singing and dancing carreer, Tanja appeared in the movie Zwei Frauen, and in many TV-films such as Bretter die die Welt bedeuten, Anna, the mini-serie Regina auf den Stufen (in 1990), Puenktchen & Anton. She also did a lot of modelling.

Tanya spent a part of her life in Eching by Munich (Germany). In 2003, she migrated to Australia.

Singing and dancing are not only her job but also her main hobbies. She also loves going to the cinema, but as she did not have much time for it, she discovered the pleasures of reading books. She collects stones of every sort, and also objects from Aboriginal art (she is fascinated by Australia and travels there everytime she can). Her favourite actors are Robert de Niro, Denzel Washington, Sean Connery, Will Smith, Meryl Streep, and Whoopie Goldberg. Sadly, her favourite music is not eurodance but RnB (among others she listens to Eric Bennet and Babyface). When asked about her food tastes she answers "Thai and Italian, besides all that my brother in law cooks". She describes herself as "a justice fanatic, hate racism all that has something to do with it. Besides, I have a lot of temperament, which is a problem for some people, but I'm absolutely peaceful and harmony needy. I'm very open to people and I very often give too much from me". She also describes herself as very clean and ordered. She hates racism, war, incorrect people, cursoriness, unfriendliness, disrespect, mess, and coldness. She also says being claustrophobic and arachnophobic.

2011 : she started working in Lobster Cave in Beaumaris (near Melbourne, Australia).

2012 : she plans to tour in Switzerland along with Tommy Fresh. Together, they could even re-record 2 For Good's You & Me.