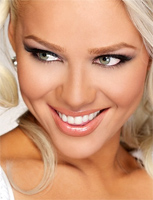 05/12/2012 : Gergana's new single is a collaboration with singer Galin, a good friend of hers, entitled Vkusat Ostava. This is their second duet.

Bulgarian pop-folk singer Gergana Georgieva Katsarska (Гергана) was born November 30th, 1984 in Dimitrovgrad, Bulgaria. She grew up with her grand parents in Govedartsi, her sister Lazarina and her cousin, pro soccer player Stojko Sakaliev. Music and sports were her 2 passions. She attended a music school in Dimitrovgrad.

After competing in the "Become a star" talent show, she signed with Payner Music in 2003. She toured with the other Payner stars and released her first single Губя те бавно ( Gubia Te Bavno, meaning "Losing You Slowly"), which sold more than 70.000 copies. During summer, she recorded the song Za Teb, Lyubov with singer Anelya, a good friend of hers. She won a TV Planeta award for Best Debut and Gubia Te Bavno was awarded best videoclip. New Folk magazine gave her 2 awards, for best debut and best album.

The following year, she released album Както никой друг (Kakto nikoi drug, meaning As no one else). It sold 40 000 copies and topped sales charts. She went again on tour with Planeta Derby. She won M-Tel special award. Her mum died from cancer in September.

2006 : during TV Planeta awards, she received a Nestle special award. She toured with Planeta Derby.

2007 : it was time for a new Gergana studio album, entitled Сладката страна на нещата (Sladkata Strana Na Neshtata, meaning Sweet side of things). In only a few weeks, it had already sold 5000 copies. First song to be released from the new album was Karma, a very nice dance track. During that year's TV Planeta awards, she won a Nestle award and Mozhe Bi Totchno Ti was hit of the summer. She also released the song Una Pasion, her first song in Spanish. She went again on tour with Planeta Derby

2008 : she was not among the Planeta Derby lineup. Instead, she did a solo tour in 20 Bulgarian cities, sponsored by Bulsacom. 4 videos were released : Bez Teb, Zabravi (Indiana Jones style, another duet with Joro Rana), Vyrvi Si (an amazing eurodance song with 3D effects reminding of Transformers) and Razdyalata Ne Boli.

2009 : she released 4 new videos : Zashtoto Te Obicham in Januray, Blagodarya Ti in April (dedicated to her mum), Imam Nuzhda in September and Do Koga in December.

2010 : in May came the video for Da Zapochnem Ot Sredata. It was a summer hit. Then in October, the video for her new song Facebook (dedicated to the famous social network) premiered. Then came the song Koyta Iska Da Vyarva.

2011 : she gave some concerts in Europe. She released 2 new videos : Pyrvitchen Instinkt (a duet with Galin, a good friend of hers) and Chte Izdyrzhitch Li. In November, she arrived too late for the TV show organized for her anniversary and was severly criticized by Gala. She denied rumors according to which she was pregnant.

2015 : Gergana was back with a new song and videoclip entitled Tvoite Dumi (Твоите Думи, meaning Your Words) featuring Galin. Song was quite succesful in Bulgaria. It was later revealed that backvocals were taken from a song performed by British-Palestinian hip-hop singer Shadia Mansour's. In December, she released a new song, a ballad entitled Ogan v Dazhda (Огън в дъжда meaning Fire in the Rain) along with a Xmas video.

2016 : in January, Gergana released a second videoclip for Ogan v Dazhda. She was said to be working on her first international single Diva featuring Romanian pop star Delia Matache, and on her 5th studio album planned for Spring.