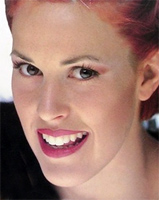 Gayà was born Stephanie Haley in Buffalo (New York) February 9th, 1975. Her family of musicians transmitted her their passion for music. She travelled with her family to sing gospel songs and folk music in prisons and churches. Stephanie has always tried to perfect his talent and never abandoned her dream of becoming a singer. At the age of 18, Stephanie left her family to attend a famous university and to continue his studies in art, singing and acting. After college, Stephanie moved to New York City, hoping to realize his dream of becoming an artist in the Big Apple. In New York, she performed in clubs, sometimes even for free, to be able to keep working as a waitress in a popular Italian restaurant. It is in this Italian restaurant that producer Roby Achilli, during one of his trips, had the chance to meet Stephanie. Intrigued by the praise he heard about this girl, he decides to go see her show. This is how Roby offered her contract to record her first single.

In 1995, Lovin 'The Way, a true eurodance track written by Mark Mazzantini and arranged by Bliss Team, was released under vinyl format in Italy by J & Q Records label. It was a huge success. In 1996 came the second single Sing Your Soul, released in Italy on vinyl and on CD, and licenced in other countries such as Mexico and Spain.

Then she turned to house/garage At the end of March 1998, she released a new song : It's Love. Printed in both CD single version mix 12, it included a remix by famous Mario Fargetta. In no time, It's Love topped every national dance chart as well as Italian sales chart. It's Love, hit of summer 1998, was featured on the best dance compilations and has been licensed worldwide. In September she was back in studio, still with Mark Mazzantini, to record the new single Shine On Me, a song that was released in Italy in December of the same year. Shine On Me received many positive appreciations on the network and all radio programming, confirming Gayà's success. In one week only Shine On Me hit #9 in the official Italian sales charts.

On October 22nd 1999 the new single I Keep On Dreaming hit the stores, along with a videoclip directed by Motion Picture House. The was in the style of winter season 1999/2000. Remixed by Fargetta, from the earliest days of promotion, the song climbed airplay and dance charts in the major networks. But Gayà's most successful single so far was Never Meet. Released simultaneously with its video, in May of 2000, it was written by Marco Mazzantini, as a CD and a vinyl. Mario Fargetta did the dance remixes, the Bedroom Rockers did an alternative pop. The single reached to heights of all the Italian dance and pop music charts in no time, becoming a real summer smash. In Summer 2000 it was included in the compilation All The Hits Now and was licensed abroad, enjoying similar success, and finishing in the top positions of the dance and pop charts in various countries.

In 2008, the radio station m2o dj team did a Hard Dance version of Never Meet.

Thanks to Marian Stoica and Tavi Meran

Listen to Gaya on Radio Euro Classic, the eurodance radio