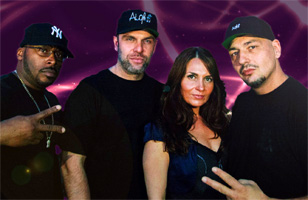 02/07/2016 : Fun Factory's forthcoming album will be a double CD entitled Back To The Factory and it is planned for August 8th. (Thanks to Krasi)

29/06/2016 : During their I love the 90's concert in Bulgaria, Fun Factory presented 2 other new songs from their forthcoming album : Summerday and I want your love (Thanks to Krasi)

12/06/2016 : Fun Factory revelead on an interview on Bulgarian radio NRJ that they were working on a new album : it will include new versions of the old hits, plus 4-5 new songs. They performed one of them, Turn It Up, during the broadcast (Thanks to Krasi)

Fun Factory started as a studio project in 1990 by Rainer Kesselbaur. He released a synthesizer-sounding Fun Factory's Theme for the first time in 1990 under a small record company near Bremen, as a vinyl only, in small quantity. The B-Side of the vinyl has a slow synth track titled Apelonia. But it did not have much success. In 1992 Rainer decided to release the Funtech Mix of the original Fun Factory's Theme song, this time along with 4 different mixes.

With their high-explosive mixture of pop, dance, rap, techno and reggae elements, they achieved international acclaim and their singles topped the charts the world over. Tracks such as Groove Me (# 1 in Israel Dance Chart, # 5 in Israel Air play), Take Your Chance (# 3 in Israel Dance Chart), Close To You, Pain (# 30 in Israel, # 5 in Israel Air-play, remixed by ATB) and most of all I Wanna Be With You (once again remixed by ATB) and also Celebration made their way into the top ranks of all important at Media Control and Dance Charts. And not only in Germany, Fun Factory tracks have climbed high in the charts in Canada, England, Sweden, the Far East, Finland, Poland, France, Italy and in the USA as well, and have made the group one of the most remarkable European acts internationally.

The members see themselves more as a band in the classic sense of the word, influenced by the spirit and roots of R&B, but taking full advantage of the most modern studio technology, Fun Factory won't allow themselves and their music to be filed away under any particular category. "The main thing is that it grooves, it kicks, it beeps and that the people feel good..." is Smooth T's answer when asked about the group's secret recipe for international success.

During 12 months they toured three times in the USA, in South East Asia and in the whole of Europe. Doing shows and having a direct contact with their public was very important for the band members too. Their stage act was pure entertainment, conceived and developed to perfection by Steve and Smooth T who both had a background in the martial arts. "Combining elements of the martial arts and dance creates something totally new. We don't want any lame disco choreography, we want real action entertainment" explained Steve.

When not performing live, Fun Factory could be found, often for nights on end, in their studio in Hamburg working on their tracks with the support of the many friends who help out now and again with vocal parts, guest raps and instrumentals.

Fun Factory's music speaks to anyone and everyone and forces all who listen 'into the groove' which for Fun Factory is what it's all about. It's as simple as it sounds "We want fun" says Marie-Anett, "that's our philosophy and there's really nothing else more important".

1994 : their first album was out. Non Stop, including their first and best hits, all mixed one after another. At this time, the female vocalist was not Marie-Annett yet, but Balja, who afterwards left the group. Her voice can be heard on few of the songs of the album, such as Prove Your Love. Marie-Annett's voice could be heard from the single Close To You. The track Love Of My Life was covered by the project La Verona (Verona Feldbusch).

According to some rumors, Balja could have been the one and only vocalist, Marie Annett being unable to sing anything. It's a fact that Marie-Annett thanks Balja on every album of the group...

After a few years, Balca stopped singing for Marie Annett. A new studio vocalist entered the team, Sara M. Baker. She had to imitate Balca's voice a little, so that people wouldn't notice the difference. The songs she contributed to were never officially released, they were only used for stage performances. She also recorded songs for some other projects produced by Fun Factory's producers.

1995 : the title of the second album Fun-Tastic was really programmatic and the 'good time dance machine' presented an ultimate, highly concentrated smash album for the Christmas season. Massive grooves, very catchy refrains, bitter-sweet soul ballads and sharp raps combined to an ingenious essence of all styles that had made dance the most important pop genre of our time and guaranteed numerous encounters with Fun Factory.

In 1997, Toni Cottura left the band, later followed by Rod D, Marie Anett and Steve. They were replaced by 3 new members : Al Walser (the new lead singer, rapper and composer), Tiger One aka T-roc (rapper) and the new female vocalist called Anett Möller.

1998 : in the end of summer the new Fun Factory released a single called Party with Fun Factory. It was a huge success and remained #1 during 5 weeks consecutive weeks.

In March 1999 they released their new album : Next Generation. Produced by Team 33, recorded in Hamburg in Germany, it was pretty successful, since it sold over 100 000 copies. The Japanese version of the album included 2 extra tracks. In July came another album, entitled Next Generation 99. It contained only 11 tracks : including the Cool Mix of Party With, the Single Mix of Sha-La-La-La-La, Party Message (actually the song Sing Along renamed), Fun Factory 99 (The Theme under a different title), the hit Close To You by the first FF team, Next To You Baby (same as Next To You with a slightly different title), and finally a different version of Ready To Flight. Lian Ross contributed to the album in studio, it could even be possible that she did all the vocals, Anett being just lipsyncing on stage.

In 2002 Fun Factory released a new album in Japan only. It contained 14 brand new tracks plus 2 remixes and was entitled ABC Of Love. Music was composed by Justmann, Kesselbaur, and Crotti. Lyrics were written by Justmann, Croom, Walser, Kesselbaur and Crotti.

2003 : Fun Factory recently decided to split up and cease their musical activites. Rod D had gone back to the USA and stopped doing music. T-roc aka Tiger 1 started a solo carreer in Romania.

2004 : Sara did vocals on Cheeka Another Saturday Night

2007 could be the year when Fun Factory will rebirth. The new producer and manager, Rekardo Heilig, organized a casting for 2 singers (male and female), a rapper, and a background-singer for the group. The castings went on until the end of February. They promised a Fun Factory summerhit for 2007 but finally nothing came out.

Toni recently confirmed that Balja was the original and only FF singer. She sang every single song on all their albums, which means Marie-Anett Mey did not sing at all. Her name is actually spelled as Balca (with a "c" not a "j") and it is a Turkish name.

Balca recorded a brand new song with Toni Cottura called Stop Playing Tricks With My Heart. Her new solo album should be coming (hopefully) this year. It will be in the FF-Style and it will be produced by Toni Cottura himself.

2008 : the new Fun Factory team has been revealed. There is Douglas, the new rapper, born in Hamburg, also a talented breakdancer. Jasmine and Joel are the new vocalists. Jasmine has been learning dance since the age of 4, she did background vocals for the project Love Machine, and also contributed to the Girl band The Sweetheartz. Joel spent 12 years at the Waldorfschule, appeared on stage with Lee Ryan and more recently in a Maggi soup commercial. And finally there is Lea, the new dancer and choreographer. Before entering the new Fun Factory, she did some modelling.

A music label called Fun Factory was created. The new album was first told to be called In The Heat Of The Night, then renamed Storm In My Brain, and the new single should be Fiesta De Samba.

Al Walser's new album should be released in September.

Annett Möller, from the second FF team, went back to Germany where she did 3 years acting studies in Hamburg. After contributing to RTL-Aktuell, working as a reporter for RTL Nord, she now currently working for the German channel N-TV as a moderator, appearing in the broadcast N-TV Wissen.

In July, the new Fun Factory team changed : the dancers Lea and Joel were replaced by the dancer and background vocalist Jenna and the dancer and rapper DGS. DGS became a member of Phen-O-MENIA, a new Rekardo Heilig project, along with Lea.

On August 11th, it was revealed that, to fit the fans' demand, Fun Factory's new single would not be Fiesta De Samba as originally planned, but Be Good To Me, a track closer to the usual Fun Factory style.

2012 : Fun Factory 3rd generation announced that the title of their new single would be Nymphomaniac but finally nothing came out. At the end of the year, all members were replaced by new ones : 2 boys (Crash and Dominique) and 2 girls (Ela and Lisa). A new single was planned for March 2013

2013 : once again a change in Fun Factory third generation performers team : Crash was replaced by American rapper Wyll (former member of Captain Hollywood Project crew and of DSDS Choir). Title of forthcoming album was revealed : On Top Of The World. It was also the name of the new single.

2014 : the team is now made of DGS, Diana, Douglas, Diana and Wyll. In January, it was announced that next single would be entitled B' Bang Bang and that it was coming soon. Then, in Ocotber and after 17 years, it was revealed that original Fun Factory members, Smooth T., Balca, Steve and Ski were officially back