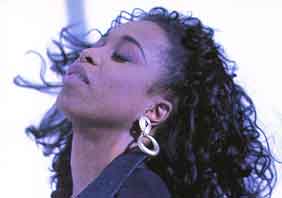 19/06/2019 : Penny Ford (Snap) and Vasileios Toris recorded single Summer All The Time. (Thanks to Tavi Meran)

She was born in Cincinatti, Ohio, U.S.A (her real first name is Pennye) in 1964. Her father was Gene Redd, who was an Executive Producer at King Records. After studying various musical instruments, Pennye joined a group called Reach, who toured extensively in Japan. Pennye returned to the U.S. and relocated to Los Angeles and managed to get work at Motown Records publishing company Jobete Music. Here she sang a few demo's of their tunes. Pennye then relocated to Total Experience Records and released a solo single entitled Change Your Wicked Ways. An album followed, entitled Pennye in 1984. The follow-up single Dangerous reached the UK top 50 in 1985.

She became Snap's female vocalist (her voice appears on The Power, Mary Had A Little Boy, and Oops Up) and, after she decided to leave the group, she introduced all the potential new singers to the producers. This was her only eurodance experience. Afterwards she went back to R'n'B and soul music.

This top session and concert vocalist has sung for Chaka Khan, Kool And The Gang, George Clinton and The SOS Band. She also contributed to the Gap Band (I Found My Baby) Barry White (his 1999 Staying Power tour), Rick James (Urban Rapsody), and Soul II Soul (Vol. III: Just Right).

In 1993, Pennye dropped the 'e' from ther christian name and moved to Columbia Records and cut the album Penny Ford, which was produced by Randy Jackson.

Her second solo album was released in 1993 under Columbia/Sony. The album boasted grade-A talent like producer/bassist Randy D. Jackson (Narada Michael Walden, Journey), saxman Gerald Albright, and pianist Greg Phillanganes. The lead single was a R&B charting hip-hop flavored cover of Aretha Franklin's Daydreaming. Ford's gospel-honed vocals on the inspiring I'll Be There - not the Jackson 5 classic - were impressive. Other standouts were the funky Nevertheless, the pensive mid-tempo Father Time, and the ballads All in Me and Wherever You Are Tonight, the latter co-written by Junior (Mama Used to Say, Too Late).

She beame a member of BWU (Black Women United). Some rumors say that she died recently (her sister Sharon died in January of 1992 from pneumonia). This was of course completely false.

Her most recent solo CD was released on Columbia Records with Randy Jackson (from real-TV show American Idol) as executive producer and on bass.

2007 : her voice was featured on DJ N-Joy's single When We Rise. She appeared in the RTL Germany TV show Ultimative Chart show in March and sung The Power with a young rapper.