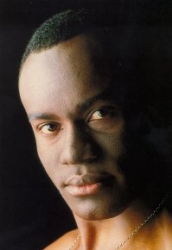 06/10/2017 : Stanley Foort aka Stanford's new single will be a cover of George Benson's Turn Your Love Around.

14/02/2017 : For Valentine's day, Stanford released a bootleg remix of Foreigner's I Wanna Know What Love Is.

Stanley Foort was born on January 7th, 1968 in Mallorca. He has a sister called Patricia. He was the son of soulsinger and gospelchoirsinger. At the age of 13, he would have like to play the drums, but his parents preferred to give him organ lessons. He also began to train as a DJ very young. He also became a talented dancer. He scored a record by dancing during 102 hours non-stop, entering the Dutch Guiness Book of Records. The following year, he won a car in the finals of a dance contest.

In 1990 he released his first solo-single, Got Me Goin Crazy, under the label Midtown.

In 1992 Stanley Foort was familiar all over the world as LA Style. He scored a mega hit with James Brown Is Dead. For almost a year touring every country in the world, he made up his mind to work as a solo artist. For many hours you will find Stanley Foort in his own studio writing and arranging new songs, producing new artists, groups, etc. and using all his wisdom to get the best songs. Next to writing and producing, Stanley is also a great dancer; for several years his name was in the Guiness Book of Records for 104 hours non stop dancing. The combination of his own songs and being a great dancer, Stanley Foort brings you one of the best performances on stage.

In 1993, 2 new solo tracks were out, Happy Feelings under the name SheShe, and Weekends as Spinn-Off.

He became famous in the world of Eurodance for hits such as Heaven Is Here (written by A. Frideman and T Gee, produced by Prophect) or Love Makes The World Go Round. All these singles were released under Polydor. Heaven Is Here was covered by the 2 Brothers on the 4th Floor a few years later.

He's been also working with his brother (cousin ?) Lucien Foort with Quadrophonia. He got married and has a son.

2003 : Stanley kept on writing tracks while doing lots of MC-gigs and a little DJ ing across the Netherlands. He did vocals on Colin Forbes' track Shut Up And Dance and was featured by Anthony Cordell for the single Surrender.

2004 : in April, Stanley become resident MC at Club Revolution in Amsterdam. He should give a MC-gig in Oostende (Belgium). In October, Stanley took part to the 3 DJs in a Boat party. In December he moved to another house. He was selected to become resident MC in a disco called Umania, unfortunately it closed one 3 monthes after it opened.

2005 : Stanley performed on New Year's Eve in Breda, alongside a percussionist, a saxplayer and DJs. Other stars featured were Ricky Rovaro and Dimitri (a very famous rtits in the Netherlands). Then, on January 22nd, he took part to the CrazySins party.

He contributed to Underground Movement under the name Stanford and the result was the track Shake, planned for release in March. He also plans to released a 2005 remix of the track Keep Your Head Up that he had released as Stanford. There should be also a collaboration with LA Style again.