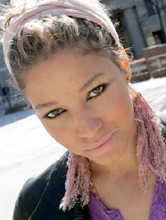 27/06/2019 : Jessica Folcker is the new ambassador for the Sprinkle Group and she will help promoting their IT platform Sprinkle Fusion Model. Her official website was redesigned.

13/06/2015 : Almost one year and a half after Gravity, Jessica Folcker drops a new solo single : Fictional was released 2 days ago.

24/03/2013 : After 6 years of silence, Jessica Folcker is back with a new single entitled Who Am I which features Dr Alban (Thanks to Krasi)

23/05/2012 : Following their successful appearence during Melodifestivalen in February, Håkan Lidbo will release his new version of Leila Ks classic hit Electric, featuring Jessica Folcker and Cleo, under Uniform Beat (thanks to Scandipop).

16/05/2007 : Jessica Folcker's new single is entiteld Snowflakes. Her album Skin Close will be released on 30th May (thanks to Apho).

Jessica Elisabeth Angelique Folcker was born in Täby, a Stockholm suburb, on July 9th, 1975. Her mother Annette is Swedish and father Louis is from Senegal. She has a brother called Isac

Jessica entered a music school at the age of 6 till she was 17. In 1994 she was selected to represent Stockholm in the Miss Sweden competition.

Her big dream to become a singer, was fulfilled when she was engaged as a backing singer for the international superstars Ace of Base and Dr Alban. She was the voice onAmadin's eurodance single You Make Me Feel Alright. She also performed the chorus in Leila K's hit Electric and appeared on E-type's album The Explorer.

Then she started a solo career, first under the simple name Jessica. Her debut album, also entitled Jessica and released in the autumn 1998, was the result of a collaboration with the world famous composers and producers Max Martin (Britney Spears) and Denniz Pop who became her boyfriend. The album was an instant hit, and Jessica became an international star overnight. As a result, she did a six week long promotional tour across the East Asian countries : Japan, the Philippines, South Korea, Taiwan and Thailand, resulting in high sales in the region, including selling gold in South Korea, where her remake of a David Foster classic, Goodbye, was used as the theme ballad in a major Korean movie, A Promise, rapidly becoming the most played song on Korean radio.

In Sweden, Jessica peaked the top of the single chart with two singles from the album How Will I Know Who You Are and Tell Me What You Like (#10 in the Swedish Single Top 60 charts), both selling platinum. Jessica Folcker became historic when she won two prizes at the awards show of Sweden's number one pop radio station, NRJ. There she won both New Artist of the Year as well as Swedish Female Artist of the Year. No artist had won more than one award until then.

Two years after releasing her debut album, in the autumn of 2000, Jessica Folcker's second album came out, called Dino, nicknamed after Denniz Pop, one of her producers. This time, the album was released under her complete name, for legal rights reasons :the name Jessica was protected. Besides Europe and Asia, Jessica wanted to conquer the USA as well this time around. She faced a problem however, many Americans pronounced her surname close to "fucker". To prevent this, she decided to take the "artist name" Jessica Folker instead, without the c. Jessica's first single from the album, To Be Able To Love, became a big hit in the states thanks to a remix by a US DJ with the name of Jonathan Peters, and soon Jessica went on a club tour to New York and New Jersey.

On the other side of the globe, another of Jessica Folcker's songs - Lost Without Your Love - became once again the theme tune of a Korean film : Indian Summer. Once again, Jessica reached the top of the South Korean airplay chart. In April 2001, Jessica's song Miracles was chosen as the theme melody for the Dutch Fame Academy replica, Starmaker. Due to this, she decided to release the song as her second single from the album. Jessica's last single taken from Dino was Crash Like A Wrecking Ball.

In Summer 2001 To Be Able To Love was released in the USA. Thanks to a remix of DJ Jonathan Peters, it became a big hit in the USA. In October and November 2001 Jessica did a clubtour in New York and New Jersey. The mix of this song could also be found on the soundtrack for On the Line, starring *NSYNC-ers Lance Bass and Joey Fatone.

2002 : Jessica's voice was featured on Bomfunk MCs's single (Crack it) Something Going On(a cover of an ABBA track) which peaked to #26 in the German charts top 100.in September she took part to a homage concert to the Swedish group Abba, singing a version of The Name Of The Game. In December, she appeared in the new Fashion Programme Aktuelle on the Swedish Channel 5:s.

In 2005, Jessica debuted in the Swedish national selection for the Eurovision Song Contest. In Melodifestivalen 2005, she performed Om natten.

2006 : Jessica participated to the third semi final heat of Melodifestivalen 2006 on March 4th with the song When Love's Comin' Back Again. She failed to qualify from the semi final. The same month she gave birth to a baby girl, a little sister for her son Antonio (1,5 years old).

2007 : Jessica Folcker's new album Skin Close, a close collaboration between Jessica and producers Andreas Kleerup and Andreas Unge, was released in May. The first single was entitled Snowflakes. It featured remixes of Credheadz, Konstruction and VeeBeeO, along with a video directed by Ensrettet.

Her hobbies are eating, watching movies, being with family and friends, and shopping.She admires her mother, Madonna, Stevie Wonder, and Prince. She admits to be very supersitious. One of Jessica's dreams would be to open a little restaurant with Italian food and entertainment in the evenings, and to have a house on the countryside with a nice husband and children, have her own animals and make her own food.

2012 : she appeared on stage of Melodifestivalen, along with DJ Håkan Lidbo (Look Twice) and Cleo, for a mashup including Leila K's Electric.

2013 : Jessica Folcker was back with a new single, a collaboration with Dr Alban entitled Who Am I.

2019 : Jessica Folcker is the new ambassador for the Sprinkle Group.