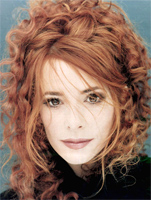 French singer, songwriter and author Mylène Farmer was born Mylène Jeanne Gautier in Pierrefonds (near Montreal), Quebec, Canada. Her family returned to France when she was 8, settling in the Parisian suburb of Ville-d'Avray. In her teenage years, she was passionate about horse-riding, qualifying as a riding instructor at the equestrian centre in Saumur. At the age of 17, she took a 3-year course at drama school Cours Florent in Paris. As an homage to her idol, 1930s Hollywood actress Frances Farmer, she changed her last name to Farmer, and she began to earn a living as a model acting in TV ads (Fiskars, Caisse d'Epargne...)

In 1984 in Cours Florent, she met Laurent Boutonnat, a young film student, with whom she forged a creative partnership, writing and producing the music. She gained fame with songs featuring controversial yet poetic lyrics, and explicit music videos. First single Maman a tort (My mum is wrong) was a mild success (an English version My Mum Is Wrong was very confidentially released), follow-up On est tous des imbéciles (we are all fools) flopped. Major breakthrough occured with smash-hit Libertine. The Barry Lyndon-inspired video, featuring a red-haired Mylène, had a running time of over 10 minutes. The following single, Tristana, also met with great success.

In 1988, Laurent Boutonnat and Mylène Farmer started to work on her follow-up album, Ainsi soit je... Singles Sans contrefaçon and Pourvu qu'elles soient douces topped the charts again. The other singles, Sans logique and title ballad Ainsi soit je... were also hits in France. In 1989 she did her first tour. A live single entitled Allan (a tribute to Edgar Poe) followed, but wasn't very succesful.

Third album was entitled L'Autre... Single Désenchantée, the album's lead single, became a phenomenon in French pop music, becoming the anthem of a whole generation and #1 in French charts. At the time, it went on to become the best selling French single of all time (both in country and around the globe), according to Guinness Book of World Records. Follow-up singles Regrets (gold-selling duet with Jean-Louis Murat), Je t'aime mélancolie and Beyond My Control (with its controversy video banned from musical channels) also had a lot of success.

In late 1992, she released the double-CD remix album Dance Remixes, containing 14 remixes of the singer's greatest dance hits plus a new song : the single Que mon cœur lâche. She released an English version entitled My Soul Is Slashed, which flopped. She then did a pause to star in Laurent Boutonnat's movie Giorgino, which was a commercial flop. After this, she decided to leave France to take a long break in California, USA, during which she started writing for her 4th studio album Anamorphosée.

The album was launched by XXL, a rock song with blasting electric guitars, which started at #1. Video featured Mylène Farmer hung on at the front of a moving locomotive. It was followed by L'Instant X (featuring remixes by Ramon Zenker), the ballad California, Comme j'ai mal and Rêver. In summer 1996, she embarked on her second concert tour which met with huge success. The corresponding live album, Live à Bercy, is currently the best-selling French live album ever, while Anamorphosée was, 16 months after its release, certified Diamond. Beyond My Control was sampled by Orion 8 for their single Behind My Control. The melody of Sans Contrefaçon was used for Patricia's single Listen To Your Heart

1999 : her 5th studio album Innamoramento was released in Spring. The lead single L'Âme-stram-gram was a futuristic up-tempo techno-ballad with erotic lyrics accompanied by a Chinese-themed video in which Farmer commits suicide to save her twin. Both the single and the album (again certified Diamond in France) went straight to #2 on the charts. The video for the second single, Je te rends ton amour, sparked controversy because of its religious blasphemy being condemned by the Catholic Church and banned by many networks. Despite this, Farmer released a video single, which became the highest selling release of that kind in France. In late 1999, Farmer embarked on her third concert tour, the Mylenium Tour, which set the record of the highest grossing tour by a non-English speaking artist. During the tour, she released the singles Souviens-toi du jour and Optimistique-moi. After Innamoramento, the last single of the album, she recorded L'Histoire d'une fée, c'est... for the animated film Rugrats in Paris: The Movie. The single (in English: "The Story of a Fairy Is...") was a play on words with "fessée" which means spanking. She then released her third live album and DVD documenting the Mylènium Tour along with Dessine-moi un mouton, the promotional single for the live CD of the show.

2000 : with Laurent Boutonnat, she wrote and produced Alizée's albums Gourmandises and Mes courants électriques. Alizée's biggest hit, Moi... Lolita reached the top of the charts and she became the most successful French singer that year.

2004 : in December , after a long period of silence, Farmer held a press conference announcing her new album, Avant que l'ombre..., and the single Fuck Them All.

2006 : she gave a series of 13 concerts in January in Paris-Bercy. They were followed by a live album and concert DVD, Avant que l'ombre... à Bercy in December. Within months, the DVD became the best-selling music DVD in France ever. She recorded a duet with Moby on his single Slipping Away.

2007 : she recorded the theme song for Laurent Boutonnat's second movie Jacquou le Croquant and lent her voice to Selenia in the French version of animated Arthur and the Minimoys.

2009 : her fifth concert tour was sold out. A new live album documenting her 2009 tour, N°5 on Tour, was released on 7 December and was as usual a massive success.

2010 : a DVD of her Stade de France concerts was released on 12 April, becoming instantly Diamond. She recorded a duet with Line Renaud, that she co-wrote with Laurent Boutonnat. She also covered Never Tear Us Apart with Ben Harper, featuring new lyrics in French that she wrote. Her new single Oui mais... non (meaning Yes But... No, and #1 in the charts) was the start of a collaboration with producer RedOne (Lady GaGa). Follow-ups Bleu Noir and Lonely Lisa were as succesful. The album Bleu Noir (for once without Laurent Boutonnat) was released on December 6th.

2012 : the new single, À l'ombre premiered on October 22nd and topped French singles chart. Videoclip was directed by Laurent Boutonnat. New album Monkey Me entered French charts at #1 on December 11th with sales about 147,000. Her new tour, Timeless 2013, will debut in September 2013.

The most successful and provocative female French recording artist of all time, Mylène Farmer is recognized as a major recording star in Europe, nearly an icon, and often compared as Madonna.