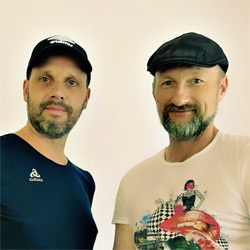 22/09/2020 : The Manny Mo Of 20 Fingers Remix of Experience Of Music's single You Can Change The World was released under DMN Records (Thanks to Krasi)

25/08/2020 : Discover the lyrics videoclip for Experience Of Music new single You Can Change The World (thanks to Frank Winkelmann)

17/07/2020 : Experience Of Music will release a remix package for their current single You Can Change The World

20/06/2020 : Experience Of Music's next single You Can Change The World will be out on July 3rd. It will feature former The Free singer Iris Trevisan (thanks to Frank).

19/03/2020 : Experience Of Music's next collaboration with 20 Fingers will be entitled Fuck Song

Cologne based and experienced Dance Music producer team is made of Frank Winkelmann & Gregor G. Schydlo. Frank is producer and songwriter. Gregor cares about composing, arrangements and mixing.

1998 : the promo-single Progressive World was released (without vocals).

1999 : the promo-album This is the Progressive World was released

2000 : Diana's voice was used in the single Progressive World.

2001: a dance-pop track called Remember Me, was recorded with Franca Morgano.

2002 : the single Hardhouse featured the voice of Lyane Leigh

2003 : the single (Do you think it's) Magic featured the voice of Lyane Leigh. The Experience Of Music team produced a single for a German artist. Unfortunately it was never released.

2005 : Experience of Music did 2 remixes for BPM's single No End No Limit. BPM and Experience Of Music are currently working together on a project called Reunion Of Dance.

The track Remember Me feat. Franca Morgano was recorded in a new 2006 version and released on the CD-Compilation The Best Techno Hitz Ever Vol. 2 by Warner Music Singapore - in Germany available at several download stores, too.

On 20th of October occured the international mp3-release of Shiny Day, the new single of Experience of Music after 3 years of silence. The single featured Sue (LOFT's new vocalist).

2007 : the brand new single is entitled Digital Love, its release is planned for May. In October, the single (Do you think it's) Magic? 2.7 was released. The term Experience Of Music is from 8th October 2007 a registered trademark in Germany.

On December 7th, their first album was out as international digital release. It will be entitled Enjoy The Shiny Days.

2009 : after 2 years of silence, Experience Of Music are back with a new voice, Kitty, and new dance tracks. The new single is entitled Summer of Freedom.

2010 : Experience Of Music are planning to release a new album in 2011. Their current single Summer Of Freedom will be featured on a Polish eurodance compilation. The next single will be entitled Im losing Control. Their remix of Shanghai'd Beats' Nite of the Groove was released. They will release their second album at the end of January. It will be entitled Second Level and will include 10 tracks plus a bonus track

2011 : Experience Of Music published a snippet of their future single in collaboration with LOFT rapper Richie Williams. Former General Base frontman MIC did the rap parts for Experience Of Music next single Electrical Madness.
They made two Electro-House mixes for the Dutch Top-act The Shrink Reloaded for the track Beat of Zen 2k12. One of them was published on the 2-CD compilation HouseNation  Todays & Future Trax (ZYX Music). The whole single release is published by Sounds United Germany.

2012: Without a doubt the year 2012 was the most successful in experience of music history. Featuring the ex front-man Michael K. from 90'ies top act General Base, their single Electrical Madness was published on more than 20 releases (CDs und digital bundles) on famous record labels like ZYX music etc. and reached the DJShop.de sales charts. The follow up single Beach Party (feat. Richard Williams) was similar successful. And not enough - the two guys released a third single that year called Mental Confusion. Later that year a remix was produced for Hula's new own single I miss U - the one guy of the famous Outhere Brothers. The same month, their new single After Spring was digitally released. It reached entries at Dance-Charts.de and Swiss DJ Charts.

2013: for their new single We Won't Stop they took the main hookline from their European Dance-Charts hit After Spring and completely reproduced a new song called We Won't stop. They featured Lightwarrior a.k.a. Shamrock (ex T-Spoon member) with his incredible rap attax. With LUNA he brought a fantastic lead voice into this track. In May Experience Of Music released their first electro EP with their 3 most recent hit tracks from 2012 - 2013. The release EP comes in 8 versions - including 4 remixes of Electrical Madness as well as remixes of NaXwell for After Spring. I miss U was finally released under DMN Records in July.

2014 : at the end of the year Experience Of Music collaborated with Elyse G. Rogers, who fronted Maxx under the stage name Linda Meek. The single Free Your Soul (Let It Flow) was released on 31 October worldwide on their own label and reached Top 10 in US Masspool Digital Charts. Mid of November the single Move it Mommy featuring The Outhere Brothers was released in 8 versions on ZYX Music Records. On 19th December they released their 3rd studio longplayer 3 with two unreleased mixes.

2015 : The official lyrics video for Move it Mommy was released on YouTube on the ZYX Music channel. The Free your Soul track was remixed by Frank "Quickmix" Hassas and put on the well known Dubstep (5) CD series made by ZYX. Frank did a remix for DJ Pierre Feroldi (Cappella etc.) and his new single Passion. It was released under The Groove Society/SONY Music. In December Frank did an over one-hour-interview on Radio Disco Show broadcasted on HOLA.FM - Radio Fuerteventura.

2016 : Experience Of Music and The Outhere Brothers released a 2k16 version of their single as a 13 remixes package on March 4th.

2017 : successful remixes were done for the 90s dance act Tamo Another Night 2k17 and for DJ Moltenis Cappella cover version of their 1991 hit single Everybody. Cappella founding member Pieradis Rossini also was involved in that release.

Thanks to Frank Winkelmann himself


Links to Experience Of Music

Complete your Experience Of Music collection

More about Experience Of Music