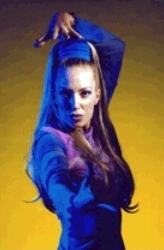 18/06/2003 : A dance single called Xanadu was released under the name of Evelyn, but it's not the Swedish artist who previously sung Funny Bunny Boy and Blue Sky Black.

Evelyn (real name : Eva Lindgren) is from Sweden, she lives in Stockholm and she was 24 years old when she started her musical carreer. She worked as a fashion model in Barcelona and has been voted 'Miss Täby' in her homeland. Her musical background ranges from choir singing in school to several live solo performances in the U.S.A where she lived for one year.

Her debut single was Funny Bunny Boy, released in the autumn 98. It has been produced by Johnny Jam and Delgado who were responsible for the megahit Barbie Girl by the Danish band Aqua. The single didn't do as well as it was hoped for in the charts, but it was played quite often in the clubs. The next thing we heard from her was a song called Blue Sky Black, a great song which is not released as a single, but was included on a soundtrack to a swedish film called 'Fucking Åmål'. Her second official single was called Play With Me. The song was about a dildo... and one was offered to the first buyers of the CD-single. The whole thing made some people furious, especially in Norway...

Evelyn's debut CD album, called Partystarter was finally complete, after many months of hard work. Almost all of the songs had been written by Evelyn, together with her producer Mats From. Here is how Evelyn comments the songs of her debut album :

"Everybody : this song starts the album, just because this was the first song that Roy, the label's director, heard. The chorus was very hard, I had to do it again a thousand times (she laughs) ! It gave a partystarter feeling.

Funny Bunny Boy : a song full of humor ! During the recordings, people asked me what my mood was. I replied : "It's Funny Bunny". Mats told me "What a great title !". As soon as I got home, I started working on this idea. 2 months later, the song was completed and it really sounded great !! (This song became her first hit single in Europe)

Movie Star : it's a fast-paced dance track ! The original was a song recorded by Harpo and released in 1976. I just love this pop cover.

Blue Sky Black : the writing and recording of this track were completed in only 2 days, in spite of what this song became my favourite. She was the last song to be added to the album.

Get It Up : the elegant chorus id not fit well, we had a lot of troubles. We finished the recorded after 2 weeks

I Belong To You : it was quite a bothering song at the beginning, since lyrics and melody did not fit together. However, we wanted to complete it, and finally we obtained a Madonna-like chorus. The acoustic guitar sound and the wind noise provide a nice sensation, which makes of this song one of my favourites.

Play With Me : if I listen to this song again, I understand with how much pleasure I finished it. Lyrics are about friendship. One may say that this song personifies the album. I recommend it for happy evenings.

All That I Need : this song changed a lot since the first demo version. Even if it was very powerful at the beginning, it finally became very groovy because of the accumulation of voices. This one must be played very loud !

Give Me Some Time : this is the very first song we wrote together ! It's a special song, not only because it was the first milestone of the album, but also the beginning of our friendship. It was finished faster than expected.

Let's Forget About Time : the lyrics were not written yet, I always hummed it Even if this one was quickly finished, I like the sound and the lyrics.

Be My Baby : Daniel found this song among his oldies as he was working as a DJ. Meanwhile, Mats who was completely drunk shouted : "This will be the next song we'll do !". That's the reason why we did this cover. Anyway, this song had a great feeling, hasn't it ? Otherwise, I wouldn't have finished it...

2000 : Evelyn has just  completed another hit-packed album titled I Wanna Dance. Aiming for the charts with songs like Woodpeckers from space, My Lover, Hotpants, Sam Fox And An Orange Rescue, Space Boogie, and of course I Wanna Dance. Just like Partystarter, Evelyn had written most of the songs on the new album.

2001 : Evelyn started working on her third album. The release was planned for the Summer but nothing ever came.

Evelyn's official site at Cool Music Sweden
Thanks to Eric-X, Klems and Régis

Listen to Evelyn on Radio Euro Classic, the eurodance radio