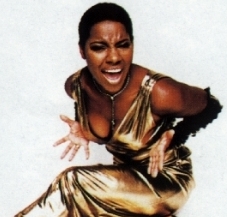 31/12/2018 : Former Culture Beat vocalist Tania Evans announced that she was planning a new single for 2019 (thanks to Valeriy)

10/09/2009 : Tania Evans performed at Nightingale Club in the UK a few monthes ago. Here is a video showing her singing Mr Vain along with a rapper called Dondeman (thanks to Klems).

08/11/2008 : Tania Evans is said to be recording some new music stuff in various styles (soul, blues but also dance music). She is planning a tour across Europe and Russia for 2009 to perform the Culture Beat classics and of course some newer songs (thanks to Cesar and Tavi Meran)

Tania Evans was born in Edmonton (North of London) of born of Jamaican parents in 1967. Her father died as she was only 3. She is 1,73 m tall and weights 56 kg. Her parents are named Christian and Sharon. She has 3 sisters, one of them called Pauline and a brother named Paul. She began to work as a standardist, then in a McDonald's during 2 years. She followed puericulture courses and loves children. She describes herself as energetic, romantic, with a very artistic temper, sensitive, loyal and generous, but she admits not to be very patient. She believes in God. Cats fascinate her. She likes travelling in order to dicover new cultures and new meals. She likes swimming, walking and painting.

Tania had founded her own band back in 1989 (Empire State), she released a cover of a song initially sung by Diana Ross (her idol) which failed, and also sang backgrounds with Neneh Cherry, Osibisa, James Taylor Quartet and others. Torsten Fenslau noticed her as she was singing in a discotheque in London. That's how she became the female vocalist of  Culture Beat from 1993 to 1997, afterwards she tried again to succeed in a solo career. "I felt it was time to move on and I had been with them for almost 4 years and I also needed to express different sides of my music and ability", she remembers.

In 1998, she released a solo single, entitled Prisoner Of Love that she composed herself with Peter Ries. The single included a remix by Hendrick Schimann and Mike Romeo. It was released by Columbia/Sony Music. It reached top 10 of USA Billboard Club Dance chart. She also appeared on the Kosmonova's single Singing In My Mind.

She lives in London, near Kensington.

More recently she recorded some tracks such as Back In My Life (for the German compnay Superflaush), and 2 others very rare : Where Does The World Go and Tango Magic.

She recorded a few tracks with Simon Westbrook (who composed for Gina G and Diana Ross among others). In 2000 she took Olu Yenigba as agent, in London (he also manages the carreers of Shahin Badar and Colin Daley).

In 2002, Tania released a house-style single entitled The Strength To Carry On (Come Into My Life) under Risque label (Capp Company), a song she had written in 1995. An unreleased mix, 2 Step mix, is available on Capp Company website.

2003 : her new single was released as vinyl. It was produced by Doug Laurent.Tania played the role of Aretha Franklin in the musical The Black Heroes Hall of Fame.

2004 : in June, she sung during 6 monthes at the Sheraton Hotel in Bangkok (her repertoire only included reggae, soul and rock, unfortunately for eurodance fans).

2008 : she still lives in London. In an interview, Tania talked about the other jobs she did besides singing : she is into property development and dental nursing. "I spent all of my 20s doing music intensely so I have had a nice long rest and realize that it is my main path and calling in life.", she explained. But she is not against doing the music full time again. "I have been thinking a lot about the fans and my music so I will take a lot more control when I have the entire infrastructure in place and will sell it myself on the net."

In November, she was said to be recording some new music stuff in various styles (soul, blues but also dance music). She was planning a tour across Europe and Russia for 2009 to perform the Culture Beat classics and of course some newer songs.