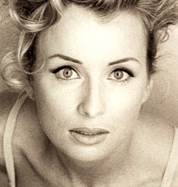 Kim Esty was born in Toronto. She is the younger of two children born to European parents (Austrian & German). When she was a child, she learned how to play the accordion. Later, during her high school years, she entered numerous contests and productions with the visions of being a singer and a songwriter.

At the age of 16 Kim joined a cover band which performed at high schools and other venues. After 2 years, she left the band to begin creating her own music style with the help of a vocal coach. She composed and recorded several songs. She released Your Love Feels Like Dynamite in 1988. Vince Degiorgio signed her to his own label in 1989. She started working with Barry Harris (Kon Kan - I Beg Your Pardon, Outta Control), Marco Lucianni (Dirty Dancing soundtrack), toured with Kon Kan in the US, and South East, Asia, Singapore, Indonesia, Taipei, Korea, Malaysia.

During the summer of 1993, her third solo single Summer In The Streets that she co-produced with Massimo "Mo" Rosati scored a hit in clubs and pop/dance radio stations. It went #1 in Toronto's Energy 108 charts and stayed there during 5 weeks.

Follow-up was Funky Little Beat, produced by Kim Esty and Barry Harris. Then a '95 version of Summer In The Streets was released. In 1995, came eurodance single I Dream Of Happiness

She also recorded song Two of Hearts, a collaboration with producer Vince "Smash" Digiorgio, a cover of Stacey Q hit. A the single version of this track was planned for release in February 1997 in Germany.

In 1998 she contributed to the Boomtang Boys's single Squeeze Toy. They had remixed the 95 version of her single Summer In The Streets. She also did vocals on 2 other of their album's tracks : Dancin' With Myself and Pictures and joined them on their 1999 Canadian tour.

1999 : following the phenomenal success of Squeezetoy, Kim released Yummy, Yummy, Yummy on the YTV compilation with friend and producer Colin McMillan. She opened up her Squeezetoy Studios. Kim Esty created a new project : the Kartoon Kids, a group of hip and youthful characters and their pets with catchy lyrics and upbeat music geared to 2-7 year olds. She also did vocals for the project.

2003 : A best of entitled Variety Show was released.

2009 : she released The Best Of Kim Esty as well as a brand new single He Doesn't Like Me.