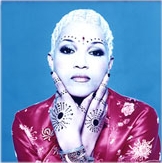 02/11/2013 : TTOO featuring Estelle Linda just published a new remix video for their current single Be Free (Thanks to Krasi)

13/06/2013 : Linda Estelle (T-Spoon) is working on a new single from a brand new act called TTOO. Release very soon under DMN Records. (Thanks to Krasi)

Linda Estelle (Linda Roza Blokland), the resonant voice of T-Spoon, was born in Arnhem in the Netherlands on the 23rd of January 1974.She has two sisters, Wendy and Sara. At the age of 16 she began singing in studios. She is blond-haired and 1,70 m tall.

After finishing high school (HAVO) she was employed in an art gallery, while occupying her spare time singing radio jingles and doing vocal studio sessions. Her interest in singing got started at a very young age and it only grew bigger and bigger. She eventually went on to working together with the boys of Arnhemsgewijs and Replay, both two very succesfull Dutch R&B groups. There was one thing that she was certain of and that was that she wanted to end up in the entertainment business.

At the end of 1995 she bumped into Remy de Groot, the manager of T-Spoon. She auditioned for T-Spoon and they must have liked what they saw, because Linda was chosen as their new vocalist. She made her debut on T-Spoon's fifth single See The Light. The song originally didn't contain her voice but only vocals from Shamrock and guest vocalist Johnny Kelvin. Linda's vocals were added on the single-release. Linda could be heard on every song of the album Lexicon of Melody.

Linda also enjoys going out to nightclubs. 'The Luxor' in Arnhem and Amsterdam's 'iT' and 'Challenge' night spots are her favourite nocturnal destinations. She also admits to being a bit of a filmbuff. Her favorite actor is Harrison Ford. 'The Mask', 'Single White Female' and 'The Fugitive' are among the films she prefers. Being of Surinam descent it's not a surprise to learn that she loves Surinamian and spicy Mexican food.

She loves animals and has two cats and two dogs at home. Linda is very fond of winter vacations although she freely admits that skiing is not one of her strong points. She still lives in Arnhem with the love of her life, her husband Edmond. And she hopes to stay part of T-Spoon for a very very long time...

2002 : Linda joined Des'ray (of 2 Brothers On The 4th Floor) and Anita Doth (former vocalist of 2 Unlimited) for a a one time project called Divas Of Dance. They will do remakes of old songs, but they will also do hitmixes of their greatest hits in their shows.

2010 : Linda and Shamrock are touring as T-spoon reloaded.