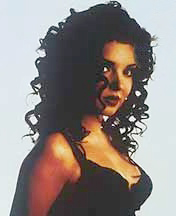 Eryx London is a singer and songwriter born in Roma. She also spent some time in London, Sheffield and Trieste. She started collaborated with Italian producers Dario Minca, Francesco Contadini, Marco Sartorello and Paolo Altin in the Black Out Studio in Trieste (Italy) in the 90s.

Single Say Goodbye was produced by Marco Sartorello, Tony Catania, Ingo Kays (from Scatman's team). Say Goodbye was written by P. Altin and F. Abrami, vocals by Eryx, composed and arranged by Quasar Team, computer programming by D.Minca. Executive producer was Vincent Messina. It was published under Not Only Music Publ. / BMG Ricordi. A videoclip was shot for the song in Venice. Story of the video was supposed to take place in 1696.

Eryx London is also believed to have done vocals for Shalima's single ‎Don't Let Me Go in 1994, as her name is mentioned in the record's credits ("Special thanks to Eryx and Franz"). She was featured on Basic Emotion's euro-reggae cover of Don't Cry For Me Argentina in 1996.

2006 : Eryx recorded a 4 demo songs entirely produced by her, with the collaboration of Simone D'Eusanio (violinist for Antonella Ruggero and Elisa) and Giovanni Vianelli (pianist for Angelo Branduardi). It was spotted by Michael Pergolani and Renato Marengo who invited her in the studios or Radio 1 Rai, dedicating to her many specials of their program "Demo".

2008 : end of the year, she founded a new alternative rock band called HOOSH, a duo with a guitarist-programming-engineering called The Jab. They played live in festivals for Radio Rai 1 and Mei in Faenza Italy, as well as In Orbit Sessions in Slovenia.

2012 : In July, HOOSH published their first (self-titled) album HOOSH. Sound was rock-alternative-punk, and it was entirely self-produced.

2013 : they toured in London in March and once again in August. End of the year, the band split because Eryx moved to London permanently, while the Jab chose to stay in Italy.

More recently, Eryx collaborated with Cosmo Cocktail, a synthwave music producer and DJ from Trieste, Italy. She lives in London, United Kingdom. She sings Indie Rock and Alternative. She recorded songs such as Selfish and Big City which don't seem to have been released officially.

Listen to Eryx on Radio Euro Classic, the eurodance radio