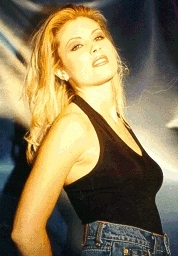 28/07/2020 : Discover a snippet from Emjay's forthcoming's single, a cover of The Supremes' You Keep Me Hanging On

07/03/2020 : Emjay collaborated with Phoenix Lord and Saggian on single As Above So Below, to be released on March 20th

02/05/2019 : Emjay will be featured on ABA/Z's single Living My Life, to be released on May 24th under Disques La Chapelle Records

02/04/2019 : This summer, Emjay and Phoenix Lord will release a new version of her hit Flying To The Moon

Emjay was born on December 9th 1974. Her musical history began at age 12, with a 7 year stint singing as a backup vocalist with a local Ottawa band. She devoted virtually all her spare time practising the many different choreographs, along with gruelling aerobic training to ensure she was in top shape for her live performances of non-stop singing and dancing. Even at that young age, Emjay was willing to work hard and do what it took to attain her dream; to one day becomes a 'lead singer'. The effort was well recognised; the band won 8 American Guild Awards. Still with the band in 1993, Emjay won first place as 'Pop Solo Artist' at the American Guild Awards.

Emjay did background vocals on Memories, a track on Capital Sound's first album.

In 1994 she recorded a solo project, resulting in her first recording contract, and the song Sound Of My Heartbeat, which charted at #7 on The Record's Dance chart. More singles followed, Fascinated rose to #5 (and was covered by a project named Microcosmica, with raps added), Flying To The Moon to #3 and, of course, her biggest success yet, In Your Arms. In July 1995 she performeds at the Théâtre du Forum in Montreal alongside Bananarama, Whigfield, Los Del Mar, and BKS (among others), in front of a crowd of 5 000 persons.

August of 1995 saw the release of Emjay's first album, In Your Arms. Even then she sizzled with Diva authority. This debut earned her 5 hitsingles, along with many opportunities, including the honour of a nomination for Best Dance Recording at the 26th Annual Juno Awards (29thJanuary 1997), and a MuchMusic Video Award. She was also spotlighted by several major Television and Radio shows, and appeared at a number of major concert events, including MuchMusic's Winterlude, Toronto Radio station Energy 108's 'Energy Rush', and many more.

On the 24th of August  1996 Emjay performed live at the Kingswood Music Theatre at Canada's Wonderland in Toronto in front of a crowd estimated at around 15 000. The event, sponsored by Energy 108, also included artists Coolio, BKS,  Ruffneck, Temperence, and many other artists. On the 1st of December 1996 she was nominated on The First Annual Cyberspace Euro-Energy Awards. On 22nd February 1997 she performed for the second year on Parliament Hill at Ottawa's Winterlude. The event was broadcast live across the nation on television stations CityTv, Much Music and Musique Plus. Then on 9th March 1997 she was at the 26th Annual Juno Awards at the Copps Coliseum in Hamilton, Ontario.

Emjay is an overall talent. She is a stunning young woman whose vocals are several notches above the competition. Her performances have a winning memorable quality ; smooth and assured, attributes that only come with experience. She is blond-haired with brown eyes. She has a big sister called Julie and a kid brother called Patrick. Her hobbies are swimming, in-line skating, working, reading, painting and dancing. She recognizes one default : she is not a morning person. Moreover she loves to shop, buy shoes, anything and everything that has a sale tag on it even if she doesn't need it. She believes in angels, in destiny, and in faith, and hates jealousy, competition and selfishness. She loves performing live in front of her fans. She has two tattoos : one of an angel, the other is a heart with a music note and two piercings: nose and navel. She is still a single person (in spite of rumors about a romance with a member of the Backstreet Boys). Before starting a musical carreer, she used to be a babysitter for 5 years, then a mail clerk for the Canadian government and an operator for Bell Mobility paging service.

When Emjay's not performing, she writes songs with her two best friends, Dan and Jean and spends time in the studio and travels to Montreal to rehearse the many choreographies with her dancers... Emjay is also taking singing lessons to keep her vocal cords in top notch. She is also spending a lot of time on the phone to personally keep in touch with her many business associates to ensure everything remains on the right track.

November 1997 marked the signing of Emjay to Tycoon Records : she had recorded her first new single We All Need Love, and was working on the full album, first scheduled for release in mid-1998. She has been chosen as the opening act for The Backstreet Boys' Canadian Tour, starting in Halifax on December 27th and ending in Québec City on January 7th. January 4th 1998 was the first filming date for Emjay's new music video. On 27th June 1998 she performed with various artists in front of 70,000 people in Little Italy in Toronto for the WorldCup Soccer game.

2005 : a single was released under the name Emjay. But it was only the scene name of Maarten Ossewaarde, a DJ from Amsterdam. Entitled Make Some Noise, it was chosen as anthem for the Global gathering Festival '05 and it entered the UK top 40 dance at #25. No relationship with the real Emjay.

2006 : Emjay performed live in Toronto on the 17th May, she sung all her former hits.

2010 : some previously unreleased tracks were published on Youtube : It Doesn't really Matter Now and the balled Who Gave Up For Love.

Listen to Emjay on Radio Euro Classic, the eurodance radio