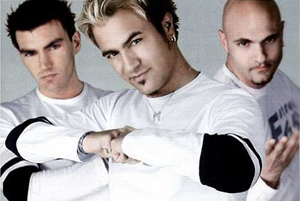 28/05/2016 : Eiffel 65 publisehd the videoclip for their new single Panico. This is a 360° video which contains hidden letters, which put together will provide you a hidden code for an exclusive gift.

Maurizio Lobina was born in Asti, he started studying the piano at the age of 5 and got into his first band at the age of ten. He grew up listening to all kinds of music and playing practically everything from house to reggae. This has made Maurizio one of the most incredibly talented Bliss Co. musicians. Famous also for his long and fast fingers. In the BlissCo World he is in charge as well of the A/R Dept. Gabriele is a professionnal DJ, he mixes the tracks for the group (under the name of DJ Gabry Bridge) and appears on the stage.

The project's name was chosen by chance. They entered many words they liked in a software that allows to create names from words according to the coincidence principle. Eiffel came out, and the number 65 was added by mistake afterwards. The '65' was part of a phone number that was inadvertently scribbled next to the name 'Eiffel' when the text was submitted for printing. 'To find a name of a group it is always a delicate process, in how much it would have to represent the artist or the music'.

Their debut single, Blue (Da Ba Dee), with its vocoder-enhanced vocals, topped the charts in England (where it 2nd best selling single for the year 1999), Germany, France, Canada, Australia, Spain, Switzerland, Austria, Denmark, Sweden, Finland, Norway, Greece, Belgium, Holland, and Ireland, and became a long-lasting number one. In Italy it was ran every 150 seconds according to statistics and went Platinum. In Israel it was number 1 and reached # 6 in the USA.

Once it's heard, it's never forgotten, as its lasting hook, uplifting verses and body-rocking rhythem are pure energy shot straight to the heart. It's inception began with Maurizio's piano riff before Jeffrey wrote the lyrics. 'Maurizio said 'come up with strange lyrics,'' explains Jeffrey. 'I started thinking about the way people are and about lifestyles-the way you buy your house, pick your girlfriend, your job, or the neighborhood in which you live. Then I came up with a color, a color that describes someone's lifestyle.' The text of Blue is based on the persons and as they are made. 'That is, everyone of we has of the ideas, opinions and a style of life that prefers. I identify this with a color, in the case of Blue the crowds are alive, a funny protagonist in a way that it wants to paint with the blue color. Blue like the sky, the sea, the Earth seen from the space and beautiful the Corvettes of years 70.' they explain.

Blue was also released, almost at the same time, by Stay C Paton in the Netherlands.

'It's important that people get a positive message,' says Jeffrey about Eiffel 65's music. 'We don't throw something down and criticize. We want to think and use our minds to fix things. Things should be built rather than taken apart. There should be something to be happy about.' Blue (Da Ba Dee) is a mix of dance and English pop, a song with a disco beat. 'We're more like an old-fashioned Depeche Mode, a solid structure, but more futuristic,' he says. 'We are electronic, but we look for new sounds like The Chemical Brothers. It's easy to sing to and to dance to.'

Meanwhile, they remixed Kim Lukas' single All I Want and a single of Ann Lee. Their second single, Move Your Body, was also quite successful since it went number one in 7 countries. It reached # 24 in Israel, # 3 in UK. It was followed by Too Much Of Heaven, a more low-tempo track, saying that the people are only thinkin' about money, forgeting about what's  really important : love, friendship. It went # 1 in Israel and # 1 in Italy. Their following release was entitled One Goal (for the Euro 2000 football championship). During the Summer 2000, Eiffel 65 toured in the whole United States, from New York (in May) to San Francisco (in July).

While the latest statistics are saying that Europop sold in over 10.000.000. copies all over the world, they already talk about the second album for winter 2001. It will be entitled Contact. Maurizio explains : "We like this title because it is inspired by the movie, and it talks about the contact with an alien civilization, which is a fascinating matter. We mainly consider Contact as the perfect word to describe the meeting point of our musical experiences and growth…". Jeffrey says : "It makes me think about the forgotten great space…which means that is incredible to understand how small we are compared to the great space that surrounds us and where it ends and where it begins".

Eiffel 65 participated at the Los Angeles Grammy Awards 2001, where they received a nomination as Best Dance Group, together with Baha Man, Jennifer Lopez, Moby and Enrique Iglesias. On the 2nd of May, 2001 they participated in the World Music Awards in Monte Carlo, as award presenters. On the 15 of May, 2001, they went to Los Angeles to receive an award from B.M.I. U.S.A. for the hit Blue. This prize was being awarded for the "most played song of U.S. radio during the year 2000".

2 singles have already been released from this forthcoming album. The first one is Back In Time, released in the beginning of 2001, the seoncd one is Lucky (In My Life), to be released after the 20th of May. It has been chosen as a single because of its sunny and summery style. Eiffel 65 will participate at Festivalbar, where they will be introducing the new single. They will be singing 4 times, including the final evening.

The new album, released in 2001, was entitled Contact. Then a new single came out in 2002 : it was called Cosa Resterá (In A Song). The track Elephants In Amsterdam was not released as single, it was going to be included in the album Contact. Bliss Corporation gave it as award to the winners of one online contest on July 19th of 2002.

Eiffel 65's third album was at first planned for October 2002 but it was delayed.

2003 : Eiffel 65 took part to San Remo awards contest with their freshly released single Quelli Che Non Hanno Eta. It was their first "totally italian spoken" song... The record appears to work good. Meanwhile DJ Gabry Ponte of Eiffel 65's new single is De Musica Tonante which contains a remix of Geordie which is also a radio single by Londonbridge. He also has been playing a remix of The Man In The Moon in his DJ sets.

2009 : Bloom 06 contributed to a remake of Alexia's song Il Branco. The new version is in English, entitled "We" is the power. It was included on her new album Ale & C.

Bliss Corporation
Eiffel 65 on the Top
Eiffel 65 homepage by Dangerous Minds
Sephiroth's Eiffel 65 Page
Eiffel 65 Center
Thanks to Shimon O'Hana for the charts positions
Thanks to Queen of Lullaby from Eiffel 65 Spain
Thanks to David Hurt, Vincenzo Roselli and Ben Smith for the latest informations