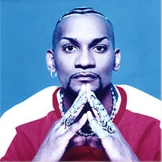 Gregory Lawrence Dillard was born on the 17th of May 1963 in Detroit, US. He has four brothers. He studied in Adrian High School. Greg started playing instruments like the guitar, keybords and drums, at a very young age. He also started writing and producing songs when he was still very young. When he was 18 he already toured America with his own band.

At the age of 21 he met a Dutch girl with whom he became friends. He eventually looked her up in the Netherlands and he liked the country so much that he decided to stay in Holland. He continued his passion for music, founded a new group and wrote songs for several groups.

1994 was the year that he met Linda Estelle of T-Spoon. They kept in touch throughout the years. And when T-Spoon was looking for a new rapper in 1998 to replace Shamrock, Remy and Linda contacted G-Money to audition for T-Spoon. Of course there were more people who aiming for the empty spot in T-Spoon... but it became evidently clear that Greg was and still is the man for T-Spoon. In the very short time that Greg had been with T-Spoon, he had already been very successful. On stage he proved to be a very talented singer, dancer and rapper... fitting perfectly in the T-Spoon team.

In an interview at that time, he told that he was living in Nijmegen (The Netherlands). He is 1,85 m tall. His favorite singer was Prince, and he drove a Smart car. He played basket ball and his favorite country remained the USA.

In 2000 Greg left the band. During the Summer, the T-Spoon crew had a lawsuit against him. He was accused of not keeping his appointments, so the crew kicked him out of the group. He claimed to be unable to be present at the bands concerts because of family issues. Greg got to court and won the case but the Judge said that he couldn't force the crew to take him back. T-Spoon did not publish the crisis on their website.

2013 : he recorded a single with Lightwarrior (Shamrock, other T-Spoon member), entitled Ooh Yes !