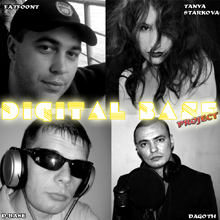 05/02/2020 : Digital Base Project published video for track Black Town from their current album Call 4 the Stars (thanks to DJ Day Dee).

28/06/2019 : A new re-recorded edition of Digital Base Project's first album EuroTrip will be available under label White Night Records on July 10th

23/04/2018 : A new Digital Base Project release entitled Call 4 The Stars is planned for next Friday.

16/01/2018 : Digital Base Project are planning to release 2 new singles : euro-reggae single Come Alive on January 19th, and eurodance single Out Of The Time on January 23th (thanks to Madenn).

17/12/2017 : Digital Base Project plan to release a new single entitled The World On Fire on December 22nd

09/11/2017 : Digital Base Project's next single will be entitled Moving Faster and it will be out on November 25th.

Initiated by D-Base, a eurodance remixer, Digital Base Project started in May 2011. The idea was born in 2010 while participating in X-Change project together with rapper FatFoont. They decided to produce songs with original vocals and raps under the name Digital Base Project. In May 2011, band started working on their first single, entitled Close To You. The author of the text was Viper, music was written by D-Base, vocals were performed by Lorda and raps by FatFoont. The single was released on June 23, 2011 and contained two versions of the track and a remix by EuroDacer.

After that Lorda left the band for family reasons. Ira Vain became the new vocalist of Digital Base Project. The next single was Life Is A Speedway, released in late August 2011. In October 2011 they released the single Positive Anthem, which included three versions of the track.

2013 : in April, Digital Base Project released an EP entitled The Heroes feat. Kate Lesing on. In December, they released a new single entitled Try Me Out

2014 : in March, a new single called Wait, Babe was out. Then in October, they released their second studio album We Are Together

2015 : in November, they published recorded a euro-reggae song entitled Stay With Me Tonight in collaboration with Jair NJ (from J&V) and Viper (from Free 2 Night). In December, their new single Live 4 Today, featuring Lithuanian singer Rasa Kausiute was available for free.

Thanks to D-Base and Madenn


Links to Digital Base Project

Complete your Digital Base Project collection

More about Digital Base Project

Listen to Digital Base Project on Radio Euro Classic, the eurodance radio