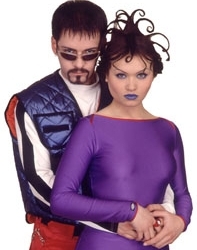 20/09/2018 : First Di Bronx & Natali album Zona Vsemirnoi Vecherinki was reedited as a digipack. Songs were remastered, and 4 bonus tracks were added. You can order it from this page.

09/06/2015 : Di Bronx and Natali published a preview of their new song Moya Vera Lyubov, written for movie My Bratya.

15/04/2015 : Di Bronx and Natali are in studio recording a brand new single. It should be featured on the original motion soundtrack of a movie called My Bratya (We Are Brothers). Natali posted some photos of the recording session.

Di Bronx and Natali is a Russian eurodance project whose main originality is to rap and sing in Russian. The story begins in 1994. D-Bronx (real name : Denis Shpitalnikov) worked in Minsk (Belarus) as a DJ. In his head came the idea to create an eurodance project that would be as good as a the western ones. It took some time to find the female vocalist, but first duo experience was great at once. They teamed up with DJ AleX who wrote all songs from the 2 first albums (nowadays he does not work with Bronx any more). There was a succession of 2 vocalists both of them being called Natali. First was Natali Artemova, a jazz singer born in Stavropol, who later moved to Paris and even took parto to a lyrical competition at the opéra Bastille. Then Natalya Kudrina (Natali) who was featured on Zemlya Mechti.

Energy of Love, the first single, was also the young project's major breakthrough. At the beginning of 1995, they appeared live for the first time on a stage in Belarus. At the beginning of 1996 the first album Energy of Love was ready. They took the decision to move to Moscow, the only way for them to achive a career. They released their first album under the Polygram Russia label and the first video was shot. They enjoyed a massive success, and after a few months wthey became one of the most fashionable groups in Moscow and in the whole Russia.

August 31st 1996 : D-Bronx and Natali took part to a live concert entitled 'Dancing City' that took place in Moscow, with other Eurodance artists such as E-Type, Snap, Boney M, Masterboy or 740 Boyz.

On the 1st september 1997 they released their second album named Zemlya Mechty (The World of Dreams). The album included a cover of Alla Pugacheva's 80s hit Balalaika (a video was shot for this song). The replacement of the first Natali (who was fired) by the second was almost unnoticed. In 1998 was also recorded the song Nadejda (Hope) with the vocalist Lena Zosimova.

In 1998 Natali left the group but in November 1999 on a large musical festival in Mogilev ' the Gold Hit ' Di-Bronx and Natali appeared together again, which was completely unexpected for everyone, singing completely new songs !

The story is not over... In 2000 the group is planning to release new album entitled Forever. Let's wait

January 2001 : Bronx and Natali spend Christmas with their family. However, they could be seen performing on the 1st of January in the Paradiz Club in Minsk. Afterwards Natali flew to Bahrayn for some concerts she had to give. She came back in April to join D-Bronx team and start working on new material for the group.

June 2001 : on the 11th June, after some efforts to match their schedules, Di-Bronx & Natali and Leonid Bortkevich recorder together some songs. More precisely, Bronx supervised while Natali and Leonid sang. Bronx and Natali were delighted with this recording, they had dreamed of for a long time.

July 2001 : Di Bronx and Natali were invited to take part to their country's greatest musical festival : Slavyanskiy Bazar that will stand in Vitebsk from the 20th to the 26th of July. They should have the time to come back from their tour in the USA. They should also be in Minsk for he Bielarus Independance Day, the City Day and the Youth Day, on the 1st, 2nd and 3rd of July. Meanwhile, the group has started working with DJ Aleksi in studio on new songs.

The same year, Nataly Artemova released a solo-song : Slova Lyubvi (Words of love) on Belarussian compilation Bulba hit. According to rumours, there could even be a full album. She then settled down in France, doing gigs in cabarets.

2002 : the new album, including 13 songs, was entitled Potomu Shto. In June it was finally released, but only available in Russia and in Germany. Only 3 songs were pure eurodance, the other ones were good euro-pop. Almost every song included Bronx's rap. Natali's voice in some songs sounded like singer from russian band "Virus"...

2003 : their new single was entitled Vremya Bystree Vetra (meaning "Faster then the wind"). The follow-up single should be entitled Ya Hochu Ostatsa Odna (I want to be alone). They also recorded a song entitled Bez Tebya (Without you) which was released on a compilation

2004 : the song Balalika '04 was released. Di-Bronx also recorded with Inna Afanasieva the song Sever I Yug (North & south) and released it in Belarussia.

Natalya Kudrina released some solo singles : Ty and Bez Tebya (meaning Without You - a video clip was shot for this song). In 2004 she announced that her first solo album, that she had began to write as she was still a member of Di Bronx & Natali, was almost ready for release. She style would be pop, she was not willing to keep on singing dance, since it was not her favourite style.

2006 : on the 8th March, Bronx had a son. He currently works for the Belarussian TV channel STV as musical director. Natali also had a daughter some time ago.

Natalya Artemova is now known as Natali Art. She went back to studio to record her first album.

More recently, Natalya Kudrina released the single Vse proydet (Everything has gone away), a cover of old Russian song by singer & actor Michail Boyarsky. She is now known as Venera.


Links to Di Bronx and Natali


More about Di Bronx and Natali

Listen to Di Bronx and Natali on Radio Euro Classic, the eurodance radio