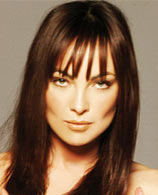 06/04/2020 : Dhany and DNF released a new version of the anthem Hit My Heart that she released years ago with the Benassi Bros

27/01/2019 : New collaboration from Dhany with McEndoz is entitled I'll Never Fall Again (Thanks to Tavi Meran)

Dhany's real name is Daniela Galli. She was born in Reggio Emilia on October 23rd 1972 or 1979. She went to university for a while to study literature but she realized that her real vocation was music. She began performing live around Italy, first in an acoustic duo called Twin Duo, then in an acid-jazz group called Dr Groove. After experimenting with various genres, she met the producer Larry Pignagnoli, with whom she began a fruitful collaboration.

Dhany is described as an enterprising and sociable girl who likes spending her free time with friends or playing volley-ball. Her favourite colour is black, like the music she loves most. Her favourite singers include Whitney Houston and Aretha Franklin. She goes crazy for Chinese food, Mercedes and Paris where her favourite clubs are.

KMC's Somebody To Touch Me (including a Classic Mix, a Goetz Remix, a Hi-Lux Remix and a Original Mix), Street Life, and more recently I Feel So Fine featured her voice. In 1998, Dhany did backing vocals also on Mietta's Album La Mia Anima.

Meanwhile, Dhany's producers decided to work on a solo album project for her. They are concocted a highly personal club-soul sound designed to bring out the unique style and temperament of one of the most promising new singers on the scene. Her first solo single Dha Dha Tune (with dazzling video to match) became a pan-European clubland must and is a modern classic. Her second single One Day In Paradise / Quiero Respirar showed the "caliente" soul of this superb performer. In 2000, Dhany guested on I Wanna Be Free, the debut single by Mumm. Her third solo single Shut Up was also released to international dance-floor acclaim.

In 2000, a first album was released. Entitled Quiero Respirar, it was only available in Mexico.

2001: Dhany created the group Links. Their first single was entitled Liberamente. Her voice also appeared on Dakka's single Ready To Fly and KMC's I Feel So Fine (#1 Club Charts in the UK)

2002: Dhany's Italian group Links, come out with their first album: Pioggia Di Polvere. Another single called Seguimi (including dance remix) was released from this album. Dhany's also appeared on Al.Ben - Run To Me (a project of Alessandro Benassi) and Mystic Diversions - Song From The Love Dance, (an Italian chillout project).

2005 : the collaboration with the Benassi Bros went on. Dhany appeared on the 4 tracks of the new album ...Phobia. Among them, the 3 singles Make Me Feel (once again a JK cover), Every Single Day, and Rocket In The Sky. Dhany also appeared on Aeroplani Italiani's single Unioni Fragili.

2008 : Dhany's new single is entitled U&I . "Its very emotional and it talks about a true story", Dhany says. She also recorded a duet with Sandy Chambers produced by Benassi Bros called Break The Wall. We performed together in live and that was great, so we thought it could be a good idea to make it also on a record and luckily the record company agreed", she explains

Dhany will appear as a guest on the album of an Italian ensemble called Kikkombo, that's going to be released soon in Italy.

2014 : Dhany did vocals on Andrea Ferrini's new single As One.

Ally & Jo : Nasty Girl
Ann Lee: 2 Times, Top Of The World
Benny Benassi: Able to Love, Love is Gonna Save Us, No Matter What You Do
In-Grid: You Promised Me, Souvenir D'été
JK : Make Me Feel, You Got Me Dancing
Mietta: Angeli Noi, Una Strada Per Te, Musica Che Scoppia, Un Passo Falso, Ancora Insieme A Te
Whigfield: Doo Whop, Givin All My Love, Unbelievable

Listen to Dhany on Radio Euro Classic, the eurodance radio