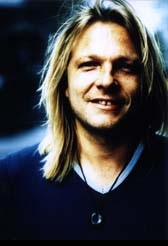 Denniz PoP was born April 26th, 1963. His real name was Dag Volle. He was a DJ, remixer, producer and songwriter.

He started his career as a DJ in the early 80's in the local youth recreation centre in Tullinge, a suburb of Stockholm, Sweden. He was one of the most well-known DJ's in the Stockholm dance scene for years. He played in all the famous clubs and he was a great inspiration to many new DJ's.

In 1985, together with some of the other among the best DJ's in Stockholm, he came up with the idea of creating a remix service like the DMC (Disco Mix Club in UK) or the US Disconet and Hot Tracks. And in the beginning of 1986 he founded SweMix.

Denniz PoP fast became one of Sweden's most wanted remixers. SweMix fast became well-known and record labels and artists (such as Michaël Jackson himself) soon approached them with their songs to remix their work.

In 1989 SweMix started to sign own artists and the company was divided into SweMix Records & Publishing and SweMix Productions. Wanting to work with more mainstream pop acts the producer left Swemix in 1992 to form another imprint, Cheiron.

Denniz PoP was responsible for the success of artists like Ace Of Base, Dr Alban, E-Type, Safe, The Backstreet Boys, N' Sync (I Want You Back), Solid HarmoniE (I'll Be There For You), 5ive (Slam Dunk Da Funk), Ultimate Kaos (My Lover), Jessica (Tell Me What You Want), and many more wellknown artists. He died of a cancer in august 1998.

2013 : Denniz Pop Awards was founded to honor his memory and also to raise money for the Denniz PoP Foundation. Every year, these awards will promote next generation of songwriters, producers and artists.

3T : I Need You, It's Gotta Be You
5ive : Don't You Want It, Everybody Get Up, It's The Things You Do, My Song, Partyline (555-On-Line), Slam Dunk Da Funk, Straight Up Funk, Switch
Ace Of Base : All That She Wants, Beautiful Life, Blooming 18, Lucky Love, Never Gonna Say I'm Sorry, The Sign
Army Of Lovers : Sexual Revolution
Backstreet Boys : 10 000 Promises, Everybody (Backstreet's back), I Wanna Be With You, Nobody but you, That's the way I like it, We've Got It Going On
Dayeene : Is this Love?, Revelation
Discovery : Straight Up Funk
Dr Alban : Away From Home, Cash Money, Fire, Hard Pan Di Drums, Hard To Choose, Introduction, It's My Life, Look Who's Talking, Mata Oh Aeh, Om We Rembwe, One Love, Reggae Gone Ragga, Roll Down Di Rubber Man, Sing Hallelujah
Draxx : Pumpin
E-Type : Fight It Back, Forever Wild, Free Like A Flying Demon, I'm Not Alone, Me No Want Miseria, Set the world on Fire, So Dem A Com, This Is The Way, We've Gotta Go
George : The Things You Do, Up & Down
Herbie : Big Funky Dealer, Change, Clap Your Hands, Come Together, I Believe, Gangs To The Max, Pick It Up, Rainbow Child, Right Type Of Mood, The Skank
Jessica Folcker : A Little Bit Longer, Goodbye, I Do, Private Eye, Tell Me What You Like
Leila K : Blacklisted, Ca Plane Pour Moi, Carousel, Check The Dan, Close Your Eyes, C'mon Now, Electric, Glam!, Massively Massive, Open Sesame, Pyramid, Rude Boy, Slow Motion
Michele : Do Me Baby
N'Sync : I Want You Back
Papa Dee : I Surrender, The First Cut is The Deepest, The Journey
Rednex : Wish You Were Here
Robyn : Do You Know (What It Takes), Show Me Love
Sandelin : Secrets