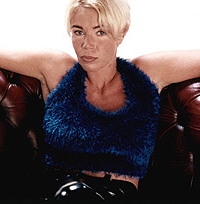 16/09/2018 : Masterboy frontlady Beatrix Delgado is selling the outfits she wore in Masterboy videos. Auction will end on 7 October 2018, and all the money gathered will be donated to Hand In Hand For Children Foundation. (Thanks to Tavi Meran)

20/05/2015 : Beatrix Delgado revealed more infos about her album Live : it will feature 5 own songs in German and English and a cover in her own style in English and German. To order it, send a mail to info@trixi-delgado.de and you will receive all necessary infos to proceed for payment (thanks to Beatrix Delgado).

30/04/2013 : Trixi Delgado published the photo of her forthcoming chillout album entitled Inside Out. It will include 16 songs. No release date yet...

21/04/2013 : Trixi Delgado (Masterboy) and Layzee (Mr President) are planning a collaboration together.

Trixi Delgado's real name is Beatrice Dagmar Obrecht. She was born in Davos (Switzerland). Her dad was a musician (he taught her how to sing) and her mum was a dancer. She used to be a taxi driver. She's been singing since the age of 15 in different rock groups. She joined Masterboy between 1990 à 1996, then she left the group. The rumor said she wanted to create a family... But we soon heard again about her : she started a solo carrer under the name of La Tour and  released a single Falling For Your Love (produced by Double AA). She also collaborated to the Enflame project for a duet with Nancy Rentzsch.

She likes sports, especially jogging. She reads a lot and loves cats. She is fascinated by Madonna. She also likes Kate Bush and Liza d'Abello. She lives in Stuttgart.

2001 : Trixi was back with Masterboy ! They released one single together : I Need A Lover Tonight

2005 : new single Revolution (We Call It) from Klubbingman (Tommy) was released in April and it featured vocals of Trixi Delgado. The collaboration went one with the release of a new single (a cover of Love Message's collective single) : Love Message.

2006 : a third single was recorded in collaboration with her former Masterboy partner : Ride On A White Train.

2007 : she did vocals on Klubbingman's single Never stop this feeling.

2008 : Trixi Delgado did vocals on a track by Store n Forward, no info wether it will be released or not as single

2009 : The Store'n'Forward single featuring Trixi Delgado that she recorded a few monthes ago is entitled Hello World and it was released on April 15th

2013 : Trixi published the photo of a forthcoming chillout album entitled Inside Out.

2015 : Beatrix did vocals on Phonkworx's single Why Don't You Love Me.