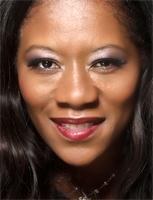 Eva Gladys del Pilar Werner and her twin sister Ann Consuelo were born in October 11th 1967 in Guayaquil (Ecuador) and grew up in a nunnery in northern Ecuador in difficult circumstances. They were adopted to Örebro, Sweden at age 7.

Gladys mother noticed Gladys had an interest in music and made sure she attended a local music school. She was asked to provide back-up vocals for Big Deal, a popular local rock band. Gladys and the sound engineer at Big Deal’s recording studio formed the house music group Real Power. They soon became associated with the Nordik beat scene and signed to SweMix Records. Real Power released the single Trust which received plenty of radio play.

Gladys then did backing vocals for many Nordik beat/SweMix acts such as Kayo. Gladys began working with Denniz Pop and he wrote the single Made Up My Mind, which became a huge hit and topped the charts. She toured in Europe as a guest artist with Dr Alban (she contributed to the choir on It's My Life). In 1992 she was named Best Newcomer at DJ Music Awards. The following year she appeared on stage for musicals "Abba-the True Story" at Berns, and Fame at the China Theater.

In 1994, Gladys ended #2 with her song The most beautiful thing I know in Melodifestivalen (the Swedish pre-selection for ESC. The next year she performed as part of the cabaret Hot'n Tot up at Berns, along with Blossom Tainton-Lindquist, Vivian Cardinal, and Francesca Quartey. The show was a success, so it was followed by a tour across Sweden. Meanwhile, she kept on performing on many recordings as part of a group, back up vocals or as a featured vocalist on house/club records.

In 1996, she released her first solo album, Movin 'On, on Eagle Records. Since the late 90's Gladys has been visiting various gospel choirs. She also lended his voice to Disney movie Hercules.

She joined Blossom Tainton-Lindquist and Kayo Shekoni to form the group Afro-dite. At first they concentrated on the business job, but gradually it became even more public concerts. Afro-dite won Melodifestivalen 2002 with the song Never Let It Go, so they participated in the Eurovision Song Contest in Tallinn, Estonia. The single sold platinum in a few months, and full length CD was #13 on the list of the 40 best-selling albums in Sweden.

2003 : Afro-dite took part to Melodifestivalen again with the song Aqua Playa. In the spring, Gladys left Afro-dite and began to work on her own with gospel and big bands all over Sweden. She participate in 2003 edition of the Stockholm Jazz Festival with gospel group Servants.

2004 : As a solo artist she entered the 2004 Eurovision Song Contest with Baby I Can not Stop.

Gladys has a huge interest in food and owns and operates a food and music catering business. She married Christer Bergh. She has also been featured in various Swedish television shows such as Så ska det låta, Postkodkampen cooking show Teatersupén .

2007 : she appeared in on stage in musicals Carmen and Hairspray in Stockholm.

2009 : she was featured by Carola on her album Christmas in Bethlehem.

2012 : she was on Melodifestivalen stage again with Afro-Dite, but their song The Boy Can Dance was not selected.