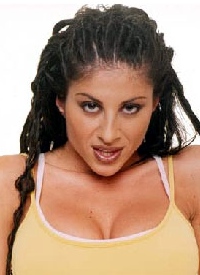 Dee was born 14th November 1973 in Kirvan, a village in Eastern Turquey's region of Kurdistan, from a Kurdish nomadic family. Dilnarin has 3 sisters : Dilbahar (who is a pop singer known in Sweden under the name Dilba), Dilsa (a writer and journalist), and Dilber, and a brother called Azad. They all moved to Sweden in 1976 to go to Uppsala then Karlstad.

Dee left her homecity Karlstad to settle down in Stockholm. The first year she spent on looking for a job, a place to live and money. After working as stage dancer for groups such as Rob'n'raz, she played a role in Swedish TV series NileCity 105.6 in 1995. Then she was noticed by E-type and started to work with him. She showed up to be an extreme exhibitionist on stage and a very talented dancer. Even if she was always lipsyncing on stage and in the videoclips, she never really sung the choruses for the project.

In 1999 she decided to move on and go solo. The same year, in August, she was featured on the Swedish men magazine Café Magazine cover and also appeared and on the Okej magazine.

Dee's solo career started seriously in the middle of 1999 when she, together with the record company Stockholm Records, started to look for material for the forthcoming album. She knew exactly what she was looking for, heavy RnB with strong pop melodies in the background and influences from anything between Sisters Of Mercy to Leila K. The lyrics were also very important for Dee. Not seldom has she been fighting with songwriters and record companies about the lyrics : "I don't want to sing about girls that have been heartbroken and hurt by their boyfriends. I sing about strong and independent girls. I'm not here to moralise and become an ambassador for young girls, but I care a lot about those kinds of issues".

The first single was All The Way Up. It was about grabbing things in life and not looking back too much. "I think a lot of people look backwards too often and look at what's behind them in disgust. Human beings remember embarrassing and hard moments, too often the positive moments are forgotten. It's about changing the negative into something positive" she explains. The next single to be released was Want You To Go, out in February 2001.

Dee is currently married and has 2 children. She works in the A&R department of a records company.

Listen to Dee on Radio Euro Classic, the eurodance radio