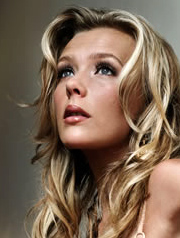 26/06/2018 : Discover the videoclip for Silvy De Bie's current single Red. It was directed by Joren Ruts and produced by Quentin Van Damme.

08/06/2018 : For the last song she performed during this year's edition of Liefde voor Muziek, Silvy De Bie at last chose to come back to dance style... Her transformed Helmut Lotti's Faith, Hope and Love into an great uptempo track reminding of The Sunclub Fiesta De Los Tamborileros.

28/05/2018 : Next month, Sylver frontlady Silvy de Bie will release a solo album entitled Baby Bird. It will include the songs she performed during Liefde voor Muziek show.

Silvy De Bie was born 4th April 1981 in Heist-op-den-Berg (Belgium). She started her musical career at the tender age of 9, in the Belgian TV series De Kinderacademie (the children academy). She released 11 singles under the name Silvy Melody. A law forbidding less than 16 years old children work put an end to her early carreer as she was 13.

In 1998, she was featured on the single Find Me An Angel by Lace.

In 2000, she started her collaboration with DJ Wout van Dessel as Liquid feat Silvy, shortly renamed as Sylver. After more than 10 years of existence, they've scored many hits, toured worldwide and sold millions of records.

2001 : she was featured by MNC on the Eurythmics cover Sweet Dreams.

2004 : she did a duet with Linda Mertens from Milk Inc on the single I Don't Care. Sylver released their third album Nighttime Calls.

2007 : Silvy gave birth to a baby girl named Noor in November. She was featured by 4 Clubbers on the single Time.

2008 : in June, Silvy and her husband Khalid have decided to end their marriage after two years.

2009 : Sil's first single single was entitled Love Don't Come Easy. This of course did not mean the end of Sylver, which released a new album entitled Sacrifice, in which Sil showed an image more glamourous than ever.

2010 : there were rumors about Silvy and Linda arguing after a Milk Inc concert. It's a fact that Linda was not invited to perform on the stage on 10 years Sylver mega convert in Antwerp...

2012 : Silvy was featured on David Latour 's single Without You. In JKuly it was announced that she would play the role of Tinkerbell in the musical Peter Pan - The Never Ending Story. In September she opened her own fashion shop Stage by Sil, located Kammenstraat 63 in Antwerpen . End of the year she released You Raise Me Up, one of the songs of the musical Peter Pan

2013 : she apparently left project Sylver and released a new solo single called Straight Up, a cover of Paula Abdul's hit.

2014 : Silvy qualified for Eurosong 2014 semi-final, her song was called Whats The Time In Tokyo. She was featured on one track of Nils van Zandt's new album Bass Addiction.

2017 : she took part to 2018 season of real-TV show Liefde voor Muziek on VTM, along with artists such as Helmut Lotti and Within Temptation

Silvy's favourite sport is Tae-Bo. Her favourite group is Boyz II Men. She loves Italian food. She is 1,60 m tall and weights 46 kg.