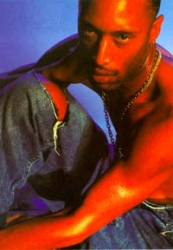 Jesse was born in Pine Bluff, Arkansas (and not it Detroit, Michigan), raised in Texas, and came to Germany in the mid 80's with the US army just like a lot of other eurodance artists... He is not only a singer, but also a composer, songwriter, producer, graphic designer and more.

The first single Get Up On This contained a sample of James Brown's voice. It was produced by Avenue (aka G. and M. Cope), keyboards were played by Mr Boom. It was released in 1991 under BMG and appeared on the Canadian compilation Club Cutz Volume 2. A remixes CD was released in 1992.

His real debut single was Is This Love, written, composed and produced by Prophecy (Arnie Friedman & Tom Gee, who also produced Florian Snyder). The B-side Be My Baby was produced by Audicon, written and composed by G. Eckert and Tom Hartmann who were also the producers of Masterjam. B.Alien and Jesse himself co-wrote this last track. The single was released under Dance Pool in Germany. It was pretty succesful in Israel where it reached #2, and #31 in the yearly chart. It appeared on the Canadian version of the Dance Pool Vol. 2 compilation, on the Canadian compilation D.J. Line Plus Vol 8.

Then came Round And Round, once again produced by Prophecy, released the following year under the same label, once again a big success in Israel where it reached #3. It was composed by G. Eckert and T. Hartmann, written by Jesse himself.

The next single was entitled Like A Flame. It was written and produced by Marck Mozart, aka Marc Z, who also contributed to Coco' I Have A Dream, Odyssey's Into The Light and East Beat Syndicate's Love Transmission. It was co-written by Rüdi Fröhling, recorded at Electric Legoland. It entered Top 10 Charts in several European countries.

2005 : Jesse Lee released an album entitled The Knight on Tour, which contained live recordings from Germany, Netherlands and Spain.

2007 : The album Unreleased came out. Jesse got married.

2009 : Jesse Lee was featured on several tracks on 11_inch and on Oskar Oskarson's Magenta Luma.

2010 : Jesse Lee appeared on Ron Paul Come We Play and on Senso Summerbreeze. In May, he was featured in Ralfe Sunshine. Jesse Lee recorded some more tracks with 11_inch, which were released on several compilations.

Nowadays, Jess Lee still lives in Germany. He owns his own recording studio. He composes music for movies (and also musicals), designs for videoclips, and stands behind some current dance artists. He is the bassinger of band The Magic Platters.