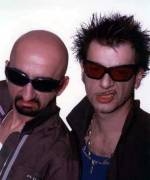 29/03/2019 : Today sees the release of the brand new remixes package for Datura's classic Fade To Grey.

28/11/2018 : Discover the videoclip for Datura's 25Th Anniversary edition of Eternity. (Thanks to Krasi)

19/02/2002 : Datura are back too, with a brand new single entitled Will Be One (thanks to Selena Valeria Giannobi).

The Datura project was born in the spring of 1991 in Bologna (Italy), being the child of the producers Ciro Pagano and Stefano Mazzavillani. They collaborated with other DJs such as DJ Ricci and Cirillo. Datura is the name of a particular medical grass very well known among ancient (inca or maya) tribes. They featured several vocalists, among them the mysterious Amparo Fidalgo and Annalisa (for instance on Will Be One).

Datura's team also stands behind other 2 dance projects. The 1st one is Masoko Solo (which released the single Pessa Pessa during the summer of 1994, followed by Oh Le Le during the autumn). Oh Le Le had been quite successful. Their second project was called Deri (from the name a mysterious Inca city). They released their only single Musica Pasandah (meaning "Music of the Past") in Spring of 2001. They also did remixes for the Italian pop group 883, as well as Moratto or Scooter.

In the October of 1991 they released their first single Nu Style and it got many consents, a remixes CD then followed.

But was in the August of 1992 the time to get the first success with Yerba Del Diablo. This single reached quickly the top of every hit-parade and awarded Datura their first golden disk, 100000 copies sold. A remixes CD was also released. Ciro and Stefano started touring in the discotheques of Europe for live-shows.

In the spring of 1993 was released the track Devotion, which was another good success. It featured the singer Billie Ray Martin who would also take part to the following singles. In the Autumn of 1993, their first and only album was out : Eternity sold over 30000 copies only in Italy. The single with the same name got even more success, as it peaked quickly at position # 1, and stayed there for many weeks. It was following by a remixes CD.

In the same year, Datura began to be very popular in the rest of Europe, as shows the international success of the single Fade To Grey, with Steve Strange as special guest.

1994 : The follow-up single, entitled The 7th Hallucination, was a real anthem in every European discotheque. In the same year Datura obtained the Best Dance Group award.

In the year 1995, Datura produced the single Infinity together with U.S.U.R.A. It another very successful track. In the same year Datura started to collaborate with Time Records and in November was recorded Angeli Domini, featuring latin vocals. In the same period, another Datura song entitled Mystic Motion entered the hit-parades. This track had been recorded some time ago, extracted from the album Eternity, and the singer was once again Billie Ray Martin.

In the 1996 came the single Mantra and, still following the same mystical theme, Voo-Doo Believe ? After only 3 weeks it had already reached position # 3. It was successful all over Europe and especially in France where it reached the 2nd position of the Dance Chart. In the 1998 it was released in USA and England too, and entered the Top-20 of the official dance-chart.

Afterwards was released a new single entitled The Sign, including 3 remix versions by DJ Fargetta. They also released From Here To Eternity, a cover of a song by Giorgio Moroder.

In 1997 was produced the single Passion, still featuring the voice of Billie Ray Martin, arrived until the 11th position in Italian dance-parade.

During the summer of 1998 they scored another success with I Will Pray and many consents.

In the 1999, Datura gave up the religious trend... We saw the release of a hard-house single, featuring this time the singer Ben Volpelier Pierrot (known for taking part to the group Curiosity Killed the Cat). The single was called I Love To Dance and contained 3 remixes by DJ Dado .

In the 2001 a millenium remix single of Yerba Del Diablo was released. In 2002 Datura did a small comeback with a track entitled Will Be One.

2004 : In August, Gigi D'agostino and Datura released a CD-single entitled Summer Of Energy.

2005 : a vinyl was released under the label SAIFAM Italy in March, a re-release of Nu Style including 2 new 2005 versions on the A-side. A new version of Infinity was released in September, the vinyl contained 2 versions : B-zar remix, and Blue Laguna mix.

2006 : Datura featured the voice of Steve Strange for a new cover of Fade To Grey, that they had already covered in 1994.

2007 : an unofficial pirate best of entitled Germenes 1991-2004 was presented on Russian fansites.

Datura's team has also made remixes for many groups:

The Unofficial Web Site of Datura

Listen to Datura on Radio Euro Classic, the eurodance radio