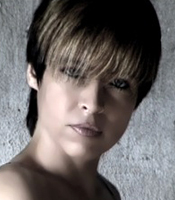 28/11/2009 : With these new dates, Belgium confirms that it's really the land of 90s concerts and parties ! On friday 4th December, Back to the 90s - We're going back will feature Pat Krimson and Wout in disco Illusion (Lier). On saturday December 19th, RGR 90s party (Aarschot) will feature Pat Krimson, Wout and Alana Dante among others.

Alana Dante (real name : Christel Hoogewijs) was born in Belgium on the 1st December 1972 or 1969, according to biographies.

At the age of 4, she started to sing along with the songs she heard on the radio. She also made up her own songs. When she was 12, she went to the music academy where she studied violin and took singing lessons during almost 8 years. After she had left school, she performed at karaoke club, disco's, etc... Where she soon was discovered by the Belgian dance-producer Peter Neefs.

Peter immediately recognized Alana's talent and they buried themselves in the studio to find songs suited for Alana's voice. Their first choice was Celine Dion's worldwide hit Think Twice, which was Alana's first single released.

February 21st 1999 Alana won the pre-selections for Eurovision 1999, with the single Get Ready For The Sunsand. But the following week the Belgian Broadcasting Company VRT selected Vanessa Chinitor to go to Jerusalem. On April 1999 she hit the Belgian Charts with Get Ready For The Sunsand and Vakantie, its Dutch version (Highest Position Number 1). June 25th 1999 : Alana released a new single Saturday Baby and performed during the Radio 2 Zommerhit event on August 6th 1999. On November 12th 1999  she released her new single Give You Up and on November 23rd 1999 she presented it on VRT 'Hitkracht'.

Alana is 1,69 m tall for 54 kg. She is blue-eyed and her hair is dark brown. She loves dog and herserlf owns a Collie. She loves eating spaghettis. Her favourite actors are Sean Connery, Arnold Schwarzenegger and Meryl Streep. She likes listening to Elton John, Phil Collins, Ace Of Base, Roxette, Cappella and Celine Dion whom she really would like to meet. Her musical tastes are very eclectic : she likes classical music, ballads, and of course dance. Her faourite author is Stephen King. She likes fitness and singing. Her favourite car is the Mercedes 500 SL. She likes holidays and happy people, and she can't bear pessimism and arrogance. She hates war. Her favourite colour is Blue and she likes wearing sportswear clothes

2002 : Alana's new single Sylvia's Mother is about to be released.

Alana goes rock'n'roll... She teamed un with a band called the Forgotten, and does some tours, singing rock'n'roll oldies. She became also a member of the Souldivaz (with Micha Mara and Sandra Kim), who released their first single Dancing In The Street.

2007 : she left the Souldivaz, being replaced by Afi. Alana was quite busy with her group The Forgotten, as well as working as a singer in a luxury hotel.

2008 : in April, Alana was a guest of Radio Donna studios for their "90s week". Wearing her mythic latex outfit, she sung live Take Me For A Ride. She released a brand new album entitled As Time Goes By, under the simple name Alana, at the end of the year.