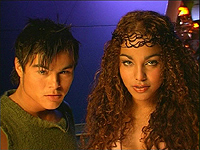 01/12/2010 : Discover Dance Nation's vide for their new single Surround Me (Thanks to Tavi Meran)

23/11/2010 : Dance Nation released their new single Surround Me. The videoclip was shot in LA (Thanks to Tavi Meran)

19/09/2010 : Dance Nation are back. Kim was replaced by a new vocalist called Sandrine. In May 2010 they released a new single entitled The Great Divide, written and produced by Brad Grobler & Rob Janssen for Noculan Music & Purple Eye Entertainment.

11/08/2008 : Dance Nation, aka Double Nation, released their new album Around The World in Japan under the name Sean & Kim.

31/07/2006 : Dance Nation (aka Double Nation) released their new single Ridin' High in July. The clip was shot in Allicante (Spain). The vinyl versions include a HI-tack remix, Franky Forward mix, and S-Kit Remix.

It's during the winter 2001 that the Noculan Music production Team were asked to create a massive summer anthem. The Dance Nation project was created, and Sunshine, their first single, scored a big hit worldwide. After this, Kim Vergouwen joined the project. Her artistic corner had begun at the tender age of 5. Some years later, she performed live in a R&B outfit gaining the necessary experience to handle large crowds. Besides music she was also a budding young actress and was keenly interested in the fashion world.

Sean also joined Dance Nation as stage performer. Born in 1979, he started at a young age with his dancing career and later he developed his singing skills. Besides his interest in music he likes Tai-boxing, skating and following the latest trends in fashion. Large crowds have been thrilled by his dancing and singing talents.

The huge second single, debuting at #2 in the O.D.C.(Germany) and spending 10 weeks at number 1 on the dj-playlist Top200, Dance! was a huge success. Then came the single Words, a song about feelings, emotions and reflection.

Dance Nation are currently finishing their eagerly awaited debut album One Nation, due for release in July 2003...

The new single from Dance Nation will be called I'm Gonna Get You. It will be released at the end of January 2004 and it will include remixes from DJ Zahny, Bradski & Jenski and Chew Fu Phat.

2004 : due to problems with their records company, Dance Nation had to change their name. They are now called Double Nation. They released a brand new single entitled I'm Gonna Get You that they presented to the German TV broadcast Club Rotation in July. The single entered the German DJ playlist at #72.

2006 : Sean and Kim got their old name back, since a single entitled Ridin' High was released under the project name Dance Nation in July. The label was Purple Eye Entertainment in the Netherlands. The clip was shot in Allicante (Spain).

2007 : the single Move Your Love which was originally released in 2005 under the name Double Nation will be released as Dance Nation in the UK in February.

Kim took part to X-Factor 2010 in the Netherlands as one of the contestants.