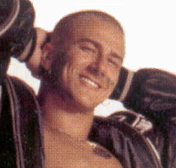 04/12/2011 : Daddy K released a cover of Boney M's classic, renamed Daddy Kool. It's doing fine in Ultratop dance charts in Belgium. He also released the second volume of his DJ Daddy K in the mix compilation. (Thanks to Eurodance Blog)

Real name : Alain Deproost. Belgian DJ and rapper (he raps in French language) from Bruxelles, he was born on January 8th 1968. He fell in love with hip-hop and started learning breakdance in 1982. In 1985 he became European champion of ground breakdance with his group the "Dynamics three". He started deejaying in 1988 and did appearance in the radio show "Manhattan" on Top FM. He became member of the group BRC (Bruxelles Rap Conventio)

He initially worked at the turntables for rapper Benny B (Mais Vous Etes Fou, Dis-Moi Bébé, Qu'Est Ce Qu'On Fait Maintenant). He won the Belgian DMC championship 3 times, once the French DJ Vestax championship, and was finalist in the world DJ championship. One of his special characteristics is to be able to scratch with his feet !

Afterwards he went solo doing the raps himself and using the skills of writers/producers Vito Lucente & Roger Quyssens for his Euro House and eurodance style releases in the 1990's.

As DJ Daddy K, he released Do You Speak Martien in 1991, Est-Ce Que Je Peux? in 1992 (together with his former partners Benny B and Perfect)

Voulez-Vous Coucher Avec Moi used a very nice melody which reminded a lot of Haddaway's What Is Love. It was released under Private Life Records, and licensed under X-Plode / Bellaphon Germany in Germany.

Stand Up featured vocals by Jayne James and additional ragga voice by Sake.

After 3 years of solo carreer and one album, he suddenly had to stop because of nodules which developed on his vocal chords : he remained voiceless during about 4 years. A terrible period for him, but he overcome by going back to his DJ carreer, winning many DJ championships and releasing remixes. He also produced the project Topazz and released tracks together with Junior Jack. He stands behind the RnB rmx compilations series.

In 2004 he was DJ on the radio station Contact RNB. In an interview he explained that he does not regret his musical past, even if he had to cope with critics and jealousy, and if it was hard for him regain respectability in the hip-hop world. He also planned to record a new single in the future... He performed as support act for many big names of RnB scene : P Diddy, Rihanna, Busta Rhymes, Sean Paul...

He has two little boys : Anthony and Nathan.

Thanks to Vision
Daddy K interview on Tuner