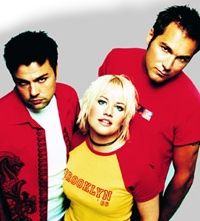 19/01/2020 : New from Da Buzz, a collaboration with Anton Ishutin entitled Show You Love

In 1998, while working on different projects, Pier Schmid and Per Lidénin met in a studio by coincidence. Despite totally opposite musical backgrounds and tastes (Pier is into Jazz, Soul and Funk, while Per worships Heavy Metal and Dance), the two musicians hit it off well and were very inspired by each other’s musical interests. Eager to learn from each other, Pier and Per collaborated by writing songs together. They wanted to create "songs and sounds" that were unique. In that creative process, they needed a female vocal. Annika was spotted while playing in a local band in Karlstad, Sweden. Pier and Per were so impressed by Annika's voice : "She is the vital missing part to our concoction, we are thrilled to have her on board !" Per exclaimed.

As the group worked and experimented further, they began playing as a band in public venues. Very quickly, they generated a buzz in the local circles, and interest on them as a band was fast building up. "We had generated considerable external interest as a band, and everybody was telling us we were creating "the buzz". So, we decided to call ourselves Da Buzz. It is a great name ! We love it !" Annika explained.

They signed to Edel records, and their first single Do You Want Me achieved gold in July, than platinum in October, in Sweden. It scored Top 10 positions in Norway, and Top 20 positions in Denmark and Belgium. Da Buzz took on the next challenge as an International artist.

They released their much anticipated follow-up single Let Me Love You (in Sweden) in October 2000. With stomping remixes from the US (Hex Hector) and UK, and a high budget video (by the famed Solar Films), Let Me Love You burst into the Swedish Top 10, on both the sales and airplay charts, proving Da Buzz’s consistency and staying power in the charts. On December 2000, the single was certified gold in Sweden.

Hot on the trails of 2 very successful singles, Da Buzz’s released its debut album Da Sound in Sweden and Norway in late October 2000, capturing instant top 20 positions on the respective official album charts. It finally sold gold in Sweden in 2001

2002 : Da Buzz released their second album Wanna Be With Me, followed by a single with the same title. "It feels like we found our style", Per says. "And the new album is going to be a bit tougher. But it still has that uplifting melodious sound". The next single Wonder Where You Are will be realesed in both Sweden and Norway May 27th.

2003 : they released a new single called Alive. The CD single included 4 versions of the song, plus a bonus track called Stop Look Listen. It reached #1 in the Official Swedish Toplist and #10 in the MTV Europe Nordic Chart. Stop Look Listen was the track with which they participated in Melodifestivalen 2003, but they were not selected for Eurovision.

2005 : Per Lidén has started his rock-project Renegade Five.

2006 : Da Buzz completed their new album. It was released on the 15th of March in Sweden. Their new single was called Last Goodbye.

June : they recorded new versions or their songs for the US market. The first singles were at first thought to be How Could You Leave Me and Set My Heart On Fire... But apparently it could rather be Alive, since a promo single was released at mid-June. A brand new single will be out in Scandinavia in October, then will come a new album in March 2007... Their won't be any tour in Sweden this summer, but a winter club tour...

2007 : the new single Soon My Heart entered the Swedish charts at #51 in the end of January. The new album initially planned for March was postponed. Then came Take All My Love in June. They finally released the follow-up single Baby Listen To Me on the 5th of September

2009 : on their official website, they announced that they were "currently taking a break and we would like to thank all our fans for your wonderful support during the years. We will be back in the future but we don't know when yet. Thank you". Per's rock group released their debut album Undergrounded Universe which had a lot of success (#8 + Grammys nomination as Best Hard Rock), with a bunch of singles (Save my Soul, Darkest Age, Running in your Veins, Love Will Remain, Shadows) with hard rock sound but the same catchy lovely tunes which you can expect from Swedish songwriters (you could listen Seven Days originally on Helena Paparizou's album before). Band has already started to record their second album with Roberto Laghi (producer of In Flames)

In June, Da Buzz announced that they were back with a new single entitled U Gotta Dance. Pier is still out of the project, because he is busy with his band Broken Door. U Gotta Dance was not a very big hit, so at the end of the year, they released a remixed version. Swedish TV channel TV4 will use it as the theme song for this year's series of their show Let's Dance.

2012 : Da Buzz released 2 singles : Got This Feeling in May, and Tomorrow in October.

2014 : Da Buzz's new single was entitled Can You Feel the Love. End of May, their next single The Moment I Found You was released.