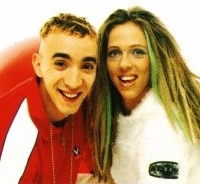 08/09/2020 : DJ Sammy's next single will be a cover of Gigi d'Agostino's hit L'Amour toujours entitled I Fly With You and will feature Miss van der Kolk (Saphira or Loona ?). It will be out under Sammy's new label MyClubroom Recordings.

22/07/2020 : Next DJ Sammy single will be entiltled This Is Who We Are featuring Australian singer Chloe Marin. Out July 31st

11/06/2016 : DJ Sammy is back with a collaboration with Level 1 entitled A Little Respect, a cover of Erasure's classic.

DJ Sammy (real name : Samuel Bouriah) is probably one of the most wellknown Spanish DJ and producer. The party king who was born on Mallorca in 1969, completed his training as a sound technican in Palma de Mallorca at an early age. He made his way into the clubs via his job as radio-DJ, at CANDENA TOP, the official techno/house broadcasting station of Mallorca. DJ Sammy has played for about 10 years in the trendiest European clubs and demonstrated a definite eye for hits.

With Life Is Just A Game, DJ Sammy delivered the absolute Balearic Islands summer hit already in the summer of 1996. He teames up the angelic voice of Carisma (Marie Jose Van Der Kolk). This was followed by the single You're My Angel to which for the first time also a video-clip was made. DJ Sammy managed the final breakthrough in 1997 when the single Prince Of Love shot up to number 24 of the German sales charts within a very short time. Since that time there has been no publication of DJ Sammy which has not reached the charts.

The debut album Life Is Just A Game with 15 DJ Sammy tracks in total which was published in June 1999, was the dance album which placed highest in the German charts that summer.

In January 1999 the new single In 2 Eternity was released on which DJ Sammy presented himself in a completly new style. Even more clubbier than all publications so far, In 2 Eternity reaches the ear first and moves from there straight downinto the legs. Parallel to the single, the long awaited Live-DJ Set appeared on CD DJ Sammy At Work. The mix-compilation entered the Top Ten of the German Compilation Charts. Already in June 1998, DJ Sammy started the pop project Loona together with Carisma and proved that, with a total of more than 3.5 milion units sold, he is a natural with hits in the techno and house scene, but is also able to stir up the pop market.

Already the first Loona-publication Bailando was awarded gold and platinum in Germany, Austria and Switzerland. With the following winter ballad Hijo De La Luna (# 1 in Germany, # 2 in Switzerland, and # 3 in Austria) and the album Lunita, DJ Sammy continued his producing career with almost unprecedented success. With the second Loona-album Entre Dos Aguas and the first release of the single Salvador Dali, DJ Sammy consequently follows his chosen path. In addition to his dance and pop productions, DJ Sammy constantly returns to his roots with additional projects in the progressive house and techno area. Under the pseudonym "Lovestern Galaktika meets le Petit Sam", he presented the unofficial hymn on the last Love Parade which in the same month climbed up to # 32 of the Media-Control.

In addition to all his production activities, DJ Sammy always returns with additional projects to the clubs where he came from. The list of his guest appearances reads like the Top Ten of the trendiest European dance temples (Dorian Gray in Frankfurt, E-Werk in Berlin, Kontor in Hamburg, Parkcafe in Munich, Pacha, Space, Privilege in Ibiza, Ministry of Sound in London) and only in the past year the enthusiastic man from Mallorca made more than 200 DJ-sets.

2001 : DJ Sammy with Yanoo released Heaven at the end of the year, a cover verion of Bryan Adam's song (if it same DJ Yanoo). It was a huge success in all european dance charts. The next single planned for release is entitled Sunlight.

2002 : DJ Sammy released a cover single called California Dreaming. He took part to the Dance United project, created to help the victims of the floodings in Germany. The project released a single called Reach Out on the 30th of September.

His new single was called Boys of Summer... it is covering once again a rock/pop-song.

2003 : In February, Boys of Summer entered the UK single chart directly on #2. In March, Sammy won the American Dance Star Award in the category "Best international act". The same month, he won the IDMA Award at the Winter Music Conference in Miami. Heaven was the "Best Hi-NRG / Euro track" of year 2003. Heaven album reached silver status in UK and platinum status in South Africa.

In October, Sammy's track Sunlight was chosen to be used in Konami's dance simulation game Dancing Stage Fusion. It will be available in mid 2004 for Playstation and Playstation 2 in Europe, Australia, New Zealand, Middle East and Africa.

2004 : DJ Sammy feat. Loona's Rise Again, at first released under the artist name Pete Tong, reached #23 in the German DJ playlist in September and entered the German charts in November at #53. Rise Again is a theme from the forthcoming movie It's All Gone Pete Tong (a comedy directed by Mike Dowse, following the tragic life of legendary DJ Frankie Wilde). Sammy and Loona performed live on Club Rotation in October. At the same moment, in France, their old hit Heaven got rank #8 in the French Top 50.

2007 : In June, Sammy's new compilation Balearic Masters vol 1 was out. Everybody Hurts (a cover of REM's hit) was the title of DJ Sammy's new single, released in October. DJ Sammy is currently busy producing his new album.

2008 : DJ Sammy is currently on tour in the USA & Canada. Some new material is planned for next year

2009 : His new single was called Feel The Love. A new DJ Sammy album entitled Clubroom was planned to be released that year

2010 : DJ Sammy recorded a new single called Animal, with writer/producer Jean-Baptiste (known for being songwriter for the Black-Eyes Peas).

2013 : His new single wasa collaboration with Victoria Horn and the Jackie Boyz calledShut Up and Kiss Me.

2014 : DJ Sammy announced that his next single would be entitled 100 Years and published a teaser for the song, but it was finally never released.

2016 : DJ Sammy collaborated with Level 1 on a cover of Erasure A Little Respect.

2018 : DJ Sammy performs on the stages of 2000s concerts with a female vocalist called Chloe Marin.