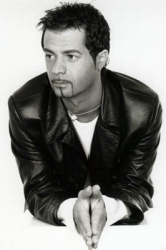 DJ Dado (Flavio Daddato) has became famous for his own progressive version, in collaboration with Roberto Gallo Salsotto, of Mark Snow's X-Files theme song. The single was a top 10 hit around the globe (# 1 in Israel, # 1 in Italy and # 8 in UK, # 16 at MTV Europe), with more than 2 000 000 copies sold. The follow up single Metropolis also reached the top 10 position at international level. After such encouraging results the album was released consolidating his image as an internationally recognised artist. By the end of 1996 Dado signed at Time records. His first single released under this new label was Revenge. This track remained in the Italian top 10 for about 2 months

Spring 1997 marked a turning point for DJ Dado : the new single called Coming Back was about to be released. For the first time it was a full vocal track with a pop flavour and a splendid vocal interpretation from Michelle Weeks. The track was recorded in New York and produced in his own recording studios in Italy. Finally DJ Fargetta from radio Dee Jay was commissioned to remix the track, adding to the versions already produced by the duo Dado/Salsotto.

January 1998 : following Millenium, a new single featuring Michelle Weeks intitled Give Me Love was released. It also contained some versions club and dub produced by famous remixer as Full Intention and Kamasutra. In November 1998, DJ Dado's team decides to join an artist of international fame such as Simone Jay in order to create a new project to be launched in October in Italy. The track entitled Ready or Not was presented with great ambitions to the Italian dance music lovers. Steve Silk and Jaydee contributed to the remixes. Since the middle of March the single was one of the most played and danced in the German and Londonian clubs, and has been reviewed in many magazines. In March DJ Dado team left to New York to record Forever, once again performed by Michelle Weeks. Already on airplay on the major radionetwork from the 15th of April, it was released at the beginning of May, including several remixed versions. The second album Greatest Hits & Future Bits was released in 1998 and that contained both old hits and new tracks.

DJ Dado has also done his own versions of Mission Impossible and Twin Peaks themes and remixed many artists such as Alexia and Imperio.

2002 : DJ Dado released a 2002 version of his hit X-Files Theme. The same year, he released a single vs Nina Badrić, entitled One & Only.