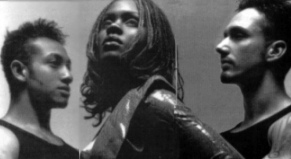 11/04/2011 : Allstar Music Belgium will re-release digitally DJ Company's hit single Holiday In The Land Of Love as well as their album.

The production team that makes up DJ Company is made of Paul Strand, Stefan Benz, and Louis Lasky.

The vocalist for DJ Company is January Ordu. The rap on the tracks Rhythm Of Love, Hold Me Now Forever, and Holiday In The Land Of Love is Carlos Cool-Rage. The rap on Hey Everybody was performed by Soul SK. The ragga chant on Fly Away was performed by Mark Jeffries. The ragga poetry on Number One was performed by Michael Romeo, former member of Le Click . Brian Thomas and Michael Fielder, as well as Giovanna Deiana (background vocals) also appear on the album Rhythm of Love.

DJ Company was introduced to the music scene in 1994, when their debut hit Hey Everybody went to #1 on the Canadian Dance Chart for 3 weeks. It was released as a CD Single and on Dance Pool Vol. 3 (a Canadian compilation), then a remixes CD was released the same year. Though they were from Germany, Canada was the only country where DJ Company became successful (that year).

Their second release was at the end of 1994, a song called Rhythm Of Love that has brought DJ Company a lot of popularity (in two different years). This song instantly became a huge success in Canada and went straight to the Top 5 (possibly #1) on the dance chart. The song also had huge staying power until about July/August of 1995. The song was released as a single and was also available on the compilation Euro Dance Pool. It ranked #27 on Billboard Charts and top 10 in Europe. A Brazilian version was recorded by project Amarildo.

DJ Companys fourth and fifth releases Holiday In The Land Of Love and Fly Away were released at approximately the same time. Fly Away was released on Euro Dance Pool 2 and Holiday In The Land Of Love received some aiplay during Hi-NRG and Euro radio programs, was released as a single, but never became popular. Fly Away started receiving airplay in about early November and immediately became a hit, but was only released on vinyl. Fly Away went to the top five of the Canadian Dance Chart and hit approx. #2. Like Rhythm Of Love, Fly Away also had staying power until about April.

In mid November of 1995, The Album was released. It included 10 songs, an intro and a special remix of Rhythm Of Love. Jam El Mar has written and produced some songs of the album. It was mainly recorded in Northend 22, Frankfurt

1997 became the year when DJ Company hit big in America. They signed to Mariah Careys new record label Crave. A new version ofRhythm Of Love was created with more vocals and no rap. It was released and went to #53 on the Billboard Hot 100 and #8 on the Dance Maxi Single Sales (a big success for a dance artist with their debut hit). Rhythm Of Love also was re-released in Canada and became a hit again.

The new album titled Rhythm Of Love was finally released on September 30, 1997. It included re-created versions of Hey Everybody, Hold Me Now Forever, a remake of Alphaville's Forever Young and a few new songs. The second single Forever Young was released at approx. the same time as the album.

Holiday in the Land Of Love was so successful in Brazil that was featured into the soundtrack of Malhaçao, a soap opera that has been broadcasted for more than 10 years.