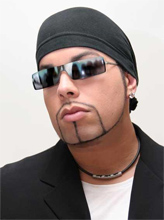 05/12/2017 : DJ Aligator's next single will be entitled Agmal Hayaa and it will feature Talal.

DJ Aligator (real name : Ali Movasat) was born on March 10th 1975 in Tehran, Iran. He was the youngest member of a rather large family, howaver he describes his childhood as a happy one, surrounded by music. Ali got a toy keyboard for his tenth birthday, and soon, without receiving any lesson, he became able to pick up any melody he'd hear here and there and replay it. He managed soon to acquire some fame in the neighborhood, known for his natural talent, and the ability to entertain. As he was only 13, he moved to Copenhagen, Denmark, where his older sister already resided. There, he attended introductory courses in jazz and classical. Upon graduating from high school, he entered the Rhythmic program at the Danish Music Conservatory. He then took a loan in order to purchase his first mixer and a few other devices. To pay this expensive loan, he had to work multiple evening jobs right after school to make the payments. One job in particular turned out to be just right for Ali. A local nightclub was on the lookout for a new DJ. He auditioned for the job and was hired.

The opportunity to work as a DJ not only brought Ali to the conclusion that it was the dance music that fascinated him the most, but also gave him the chance to meet other professionals in the field. Among them, René Dif. Together, they collaborated on Factual Beat and released an album in 1995. It did not hit the charts and the two decided to go their separate ways. René set about forming Aqua, and Ali began to produce music for himself other artists. He contributed to eurodance project Zoom in 1998.

On a November night in 1999, as Ali was DJing, he noticed some guys on the dancefloor blowing at whistles to the beats of the music. The combination seemed to work quite well and Ali was struck by a sudden idea. The Whistle Song was born. But no record company showed any interest, so he burnt over 180 copies on CD and shipped them out to every single DJ he knew in Denmark. Gradually but quickly the song became quite popular. He eventually signed a contract with Kenneth Bager (FLEX/EMI Records), and The Whistle Song (featuring explicit raps by Al Agami aka Ral) was released under DJ Aligator Project. It topped the dance chart of most countries in Europe.

In order to send a message to all the record companies that originally refused to give him a chance, Ali chose to name his album Payback Time.

In the year 2002, The Whistle Song became a huge hit in the UK ending up as #5 on the official UK single sales chart. He was asked to perform live on Top Of The Pops, being the 4th Danish artist ever to appear on the world famous TV-show. Shortly after came a second album, The Sound Of Scandinavia, selling more than 2 million copies worldwide. DJ Aligator is considered the first Danish and Iranian artist ever to have won awards in Russian Music Awards, Danish Music Awards and Danish Dance Awards along with a nomination in MTV Europe Music Awards.

He turned one of his 2 villas in southern Sweden into his private recording studio that he calls Gator Records. He did remixes for Me & My, Infernal, Nik & Jay, O-Zone and Medina.

2005 : he released Countdown under the name DJ Aligator.

2010 : he shortened his project name again, being now known as Aligator, and released the single Gi' Det Til Di, feautring Jinks.

2011 : he released the singles Starting Over and Trash The Club (feat. Al Agami).

2012 : his new single The Perfect Match was a collaboration with Daniel Kandi, featuring vocals by Julie Rugaard.