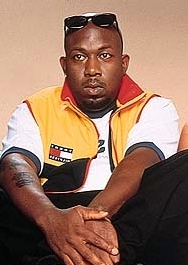 09/07/2012 : D-Rock posted his most recent hip-hop/rap creations on his Soundcloud account. (Thanks to Eurodance Blog)

14/02/2012 : D-Rock (2 Brothers on the 4th Floor rapper) was featured by James Stefano on a cover of Eurythmics hit Sweet Dreams. (Thanks to Dance Music News)

20/03/2010 : D-Rock (2 Brothers on the 4th Floor rapper) is currently a member of group Sweetcoffee. The recently released a single entitled U-turn (from their album Face To Face in stores since February 25, 2010.

Rapper for the group 2 Brothers on the 4th floor. His real name is René Phillips and he was born in Aruba on January, 17th 1970.

He left Aruba at the age of 6 to emigrate to the Netherlands. He lives nowadays in Amsterdam but he used to live in Utrecht (the home town of the real Brothers; Martin and Bobby Boer). He spent his early teenage years in Dayton, Ohio and returned to Holland at the age 18 to pursue a career in music.

He started under the name of CMC, as rapper for the group Master Rockers, later renamed Mellow MCs, in collaboration with a friend, Benny Ferrier (aka Mighty B) in 1989. René met a lot of artists, among which the rappers of the group 24K, who were searching for a guest rapper for their 2nd album Words... Yet Unspoken. The album featuring René as CMC was released in 1992 under the label DJAX. The same year, René could be heard on King Bee's album Royal Jelly (with Pryme and Allstar Fresh aka Guan Elmzoon), and of course the mini album Working Undercover released by the Mellow MC's.

Then he ran into his future producers. With them he recorded and released a solo single called I Can't Believe It's Over, unfortunately for him the single didn't do that well. Raps would be later reused on an eponymous track on 2 Brothers on the 4th Floor's first album. He should have been the rapper on Can't Help Myself et Turn Da Music Up too, but at that time he was tied by a contract in another records company... For the 2 Brothers on the 4th Floor's third single, he joined the project along with the female vocalist Des'ray. This was the beginning of a succesful story which led to 10 top 10 singles...

In 1993 he met Brian Busby and together in 1995 they created the label CMC Records, (under which were released debut singles of E-life, Postman and Two Outta Milions) in collaboration with Soul Relations, one of the most active black music label in the Netherlands. During 2 years, D-rock also presented the TMF TV show The Pitch together with the rapper Glaze. The show presented every week the best national and international hip-hop artists. After the show's last season, Glaze and René joined the station New Dance Radio. There, together with DJ Mass, they presented a weekly radio hip-hop show called Tha Bomb.

René's love for music also goes out to Hip Hop (Rap) an R&B music. He is the biggest fan of Janet Jackson and hopes to meet her once.

In 2000, René and Brian signed a partnership contract with Edel Records and moved their studios to Hilversum. They oriented their activity to new talents discovery. For instance Keeyel who scored a hit with the single Geef Me Dat Ding

2003 : D-Rock released a hip-hop single named Who Wanna Make (Chi Ching) under the artist name of Mr. Philips feat Masta. The single entered the Yorin Pepsi Chart, the Mega top 100, and the box top 50. After these release the mini album The Bootleg EP was released in September 2003, produced by Big Dawg. The vinyl contained 6 strong clubtracks, with guest performances of Richmen Inc., Laquatal, Masta and the singer Karima Lemghari. Meanwhile, he spent 2 years working for Funx radio.

2004 : René reoriented his activities to new artists production. In association with Bas & Joel, he scored a top 20 hit with the single Too Dangerous! He started working for The Box TV, the collaboration ended in 2005.

2006 : D-rock deejays every Saturday night on FunX Amsterdam Club, and on Monday nights from 21:30 in the urban lifestyle program ULS op the Box. In January and May, he appeared on stage with Des'ray to sing the 2 Brothers on the 4th Floor's greatest hits.

2007 : he collaborated with the house project Soul Migrantz on the track Calling Chicago.

2008 : in November, another result of his collaboration with Soul Migrantz was the track Socialize

2010 : though he is still the official rapper of 2 Brothers on the 4th Floor, he is also a member of group Sweetcoffee. They released their second single U-turn from the album Face 2 Face (in stores since February 25, 2010). He currently lives in Antwerp, Belgium.

2012 : D-Rock was featured by James Stefano on a cover of Eurythmics hit Sweet Dreams.

Listen to D-Rock on Radio Euro Classic, the eurodance radio