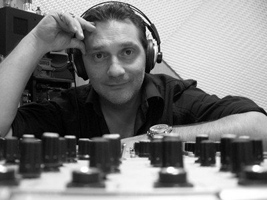 Maurizio Cristofori was born in Rome where he graduated in Art History with a thesis entitled "The artistic literature during the Counter." As a self-taught composer and arranger began his professional career in 1976 performing with dance bands. In 1980 he founded the Gramma Quartet, a (very) experimental jazz band, which held many concerts, some of them with such greats as Toni Formichella and the master Giorgio Gaslini.

In 1985 he began his career as a producer. He started a collaboration with DJ producer Favilli Carlo that gave rise to many products, including two-time gold Excalibur of FBC published in 1994 by Australian record company Colossal. At the same time he created soundtracks for commercials, documentaries and two films (a first film by director Marcello Spoletini and "Fantozzi Return"). In 1995 he started working with BMG Italy: Christmas Holiday Compilation MIX-Files Project with some tracks mixed by DJ Bismark Latin Sax and more. He took part to the dance projects Karmatika, Manuel, K.U. featuring Elly Jones, F.C.B., Kizomba and S.I.T.O.

While continuing the dance productions with the FCB, Maurizio Cristofori depth study of the art recording studio creating the RED ZONE fusion of high technology and creativity. Intense theatrical activity for years: he worked for several directors including Alfio Petrini, Aldo Massasso, Cristiano Censi Isabella Del Bianco, Claudio Borgoni, Lucia Modugno. Still alive and passionate work with Sergio Admired for which treatment representations of the Oak and the rate of Amphitryon Theatre since 1985.

In 2001, prompted also by his passion for the AS Roma, he produced a CD in which are mixed choirs of Roma fans and backing tracks, and the video Here, a novelty and a great success. In a few weeks were sold tens of thousands of copies. After winning the championship in Rome he also produced a report on Japanese television. The CD would soon be four and choirs would all have great public approval. Memorable Remo Remotti in the interpretation of Semo tired. Scathing song about the world of football in the style of the great poet.

In 2004 the Lazio Region has an ambitious project: creating a data base of multimedia on popular music of Lazio. The project was approved with great enthusiasm and led to the video archive site www.musichedellazio.it. Filming, recording and archiving are still underway to create the most complete multimedia studio on the musical traditions of Lazio.

Thanks to Maurizio Cristofori himself