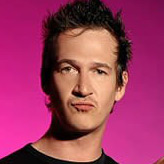 Born in 1966, Emanuele Cozzi had been DJing since he was 15 years old. Then he became a speaker at Rete 105 Network (a big radio station in Milan). He loves Paris and feminity. He hates egoism. His favourite groups are Sigue Sigue Sputnik and Kenny G. He met Maurizio Rossi in 1991, thanks to the producer Secchi. They began to work together under the name of Co.Ro.

In 1998, Emanuele Cozzi (aka "Paps") teamed up with Davide "Skar" Scarpulla : they created the Paps 'n Skar project. They appeared in the Italian market in June 1998 on the Time Records label with their first single Because I'm Free, which was easily recognizable as it featured samples from the song One Step from the band Kissing The Pink. Vocals for this track were provided by Linda Peverini.

One year later, in July 1999, they came back with their first majorly successful single You Want My Love (Din Don Da Da). This time, female vocals were done by Paola Gun. With this single, Paps 'N' Skar were invited to perform at the World Dance Music Festival in Tenerife in October in front of more than 150 000 people.

In April 2000, they returned to the Italian music scene with their 3rd single Turn Around. This track dominated the Spanish airwaves, and Paps 'N' Skar were dubbed as the "Most Air Played Group" in Spain that year, as well as once again finding themselves performing at the World Dance Music Festival. This track's chorus (like their first single) was also recognised as it was sung to the same rhythm as the Nik Kershaw 80's classic I Won't Let The Sun Go Down On Me.

February 2001, Paps 'N' Skar released their next single Get It On, which featured a more softer vocal performance from their female singer. This single was mainly noticed in the Italian Music World, especially by the organisers of Festivalbar, since they booked Paps 'N' Skar to perform their latest hit in their open arena gig. The bookings didn't stop there though... They also performed live on the Disney Channel in Italy, to great responses from the young listeners. In the Deejay Parade charts, the song managed to peak at #4, and in the former Super Deejay chart, the song entered in it's first week at #2. And in France, in the official club charts, Get It On managed to take the prestigious #1 spot.

Another whole year later, in February 2002, they returned with a 5th single entitled Loving You. This their first single to feature only male vocals. This track reached #31 in the official FIMI Italian singles charts and #3 in the Deejay Parade charts.

In February 2003 they released their sixth single entitled Love Is Love. This track was only released on 12" vinyl record, therefore did not chart in the Italian singles charts.

Success went back during summer of 2003 : their 7th single, Che Vuoto Che C'è, based on a large sample from the chorus of a classic RAF song called Siamo Soli Nell'Immenso Vuoto Che C'è. This was their first single to be sung in 2 languages : English and Italian. This was also the first song they performed under their new label, Warner Music Italy.

With Christmas 2003 closing in, Cozzi and Scarpulla decided to give their own Christmas present to the Italian people, in the form of their 8th single entitled Mon Amour. ("My Love" in French). Once again, the chorus was a sample taken from a 80's track : this time it was picked up from Video Killed The Radio Star. They also promised they would release their first album during 2004, more than five years after their music debut. The album would contain all their previous hits, plus some new ones.

With this new album on its way, Paps N Skar couldn't resist releasing one more single. The (unbelievably) 9th single was entitled Mirage (La Luna), as usual a cover from the 80's. With this single, they gained their highest position on the Deejay Parade charts, climbing up to #2.

Thanks to David Hurt