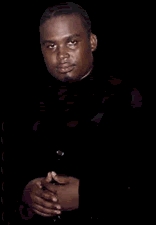 Cool James real name was James Dandu. He was also known under the other scene names Mtoto wa Dandu and CJ Massive. He was born in July 5th 1970 in Mwanza, Tanzania. He did his primary studies in Dar es Salaam Olympio, then his parents moved to Sweden. "I couldn't study mathematics there, which I really wanted to do, because I didn't speak Swedish and they would only teach it in Swedish, but I opted to go for music and ended up enjoying it."

His professional musical career started in 1983, he released his first musical album in 1986, already a dance-oriented production. Then he joined the Kenyan Andrew Muturi and created the group Swahili Nation. Together they released the hit single Mpenzi. But "Andrew's brother wanted to join in and we let him, and after that another brother... I mean after a while all this family stuff started to get in the way of business", he explains. So in 1990 James left the group, and started a business to promote himself and his entertainment work. Called Dandu Planet, the company now owns subsidiaries that are involved in artist management, production and publishing work.

In 1993 he created the eurodance project Cool James and Black Teacher. They released one album and many hits such as Dr. Feelgood (it won the Best Scandinavian Dance Track in 1994), Godfather and The Rhythm Of The Tribe.

Then he went back to his solo career as a rapper in his homeland, Tanzania. He wrote and produced his music himself. "When I came to Africa, I had to decide between doing the music for the love of it and not making much profit, or going back to European-oriented music and doing it for the profit." he said.

Cool James was a great supporter of African music. He registered another subsidiary of his company, Dandu Entertainment, in every East African country, to seek out, produce and manage talented, underexposed African artistes. He started the Tanzanian Music Awards in 1999.

He married Devotta Chuwa and had 2 kids called Caroline-Jamie (who he referred to as Malaika in his songs) and Michael James Junior. His hobbies were music and football, he admired Puff Daddy and Koffi Olomide. Michael Jackson also inspired him a lot.

He died in a car accident on the 27th of August 2002 in Dar es Salaam, Tanzania.