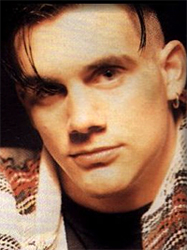 In 1991, 21 year old David John Cicero, singer and keyboard player, was the first signing to Pet Shop Boys new label Spaghetti Recordings. Born in Deanport, Long Island, USA in 29th May 1970 of an Italian-American father and Scottish mother, he had left the States at an early age moved to Scotland where he attended school. The proximity of the school's playing fields to "Hearts" football ground guaranteed, as with all his contemporaries, that he became a seriously enthusiastic football fan.

By the time he was fifteen Cicero had formed his first band with some schoolmates, practicing in the local snooker hall. On leaving school, Cicero managed to keep body and soul together with a variety of jobs, everything from waiting tables at the Hilton to apprentice joiner.
However it was music that was to remain the driving force in his life. His unquestionable song writing and vocal talents made him something of a "local hero" in his home town of Livingston,
where he regularly plays to audiences of three to four hundred.

The all important break came when Pet Shop Boys played the "SECC" in Glasgow, presenting Cicero with the golden opportunity of passing his demo tape to Neil Tennant and Chris Lowe. "I was playing one of my demos to some friends in the car. I put it in my pocket but I never thought I'd hand it over to anyone. But when we got into the place I saw Peter Andreas, who was their personal assistant at the time, and gave it to him." he explains. They were impressed ; impressed enough to want to fly up from London especially to see him perform live. Their journey was not in vain as, despite being "nervous as hell", Cicero turned in a performance outstanding enough to secure that magical first record deal.

His debut single Heaven Must Have Sent You Back To Me, produced by David Jacob, was out on 12th August 1991 through Polydor Records.

His second single was Love Is Everywhere. "It's about one of my ex-girlfriends who mucked me about a bit", Cicero tells. Actually, the previous single was also about her... At this time, he still hadn't had time to get a driving license. Released in December 1991, it reached #19 in the British charts in February 1992 and #8 in Scotland.

In 1992, came the single That Loving Feeling. The video featured the football team sponsored by the Pet Shop Boys : PSB Riverside. It went #41 in the UK #12 in Scotland

Then, a remixes CD maxi of Heaven Must Have Sent You Back To Me was released in July, it contained a new Cicero instrumental Jungilism. A cheap video was filmed in Chris Lowe' hometown, Blackpool, partly on Chris' own handheld camera. It showed Cicero dancing on a beach under the pouring rain. The video was shown twice on The Chart Show (Major UK chart programme in the early nineties), but rather disappointingly, the single only reached #70.

The same year came the first album Future Boy, produced by David Jacob. It included all the previous singles (Heaven Must Have Sent You Back To Me was remixed by the Pet Shop Boys), as well as two instrumentals composed by Cicero, Cloud 9 and Sonic Malfunction, which he produced himself : these 2 tracks were added at the last moment.

Live For Today, the next single, featured the vocalist Sylvia Mason-James. It was the theme tune to a movie called The Crying Game directed by Neil Jordan (which won an Oscar). It was released in November.

In 1993, Cicero started writing new songs, along with Sylvia Mason-James. He also learned how to play the guitar.

In 1994, Cicero was signed, through Spaghetti, to EMI records. He decided to get a singer, and after advertising in MixMag and SKY Magazine he auditioned many vocalists. "He has written some great new songs," says Neil. "The best is yet to come," nods Chris. An album was promised for 1995. He supported Take That on their UK tour.

After a long search, they saw a singer called Bianca on Stars In Their Eyes imitating Mariah Carey. She and Cicero recorded a song together, for release on Spaghetti, but then she decided that she was signing to PWL records as a solo artist so Cicero's record was cancelled. Cicero went back Scotland, his brother became his manager and he released a record which entered the Scottish dance charts

Cicero's first release after leaving Spaghetti Recordings was titled Don't Worry. Released on Clubscene Records (A Scottish Independent Dance Label) in 1996. The single was mainly instrumental with no singing from Dave, and included un-credited voice samples.

Cicero's next release was a cover version of an old Soft Cell hit called Say Hello, Wave Goodbye. This was a return to old form for Cicero, however it did not get country-wide acclaim. Also released in 1996, this single was a duet with the female vocalist and model Marianne. The B-side was another of Cicero's instrumentals.

Cicero's last commercial release was Summertime The track was co-written by Marianne Murphy, the female vocalist who sung the track. No Cicero vocals could be heard on this song. Released in 1997 on Acadamy Street Records, another fine track with Cicero taking a back seat as was originally planned for his work on his second album with Spaghetti Recordings. The release also saw a follow-up B-side to the one on Don't Worry.

Between 1997 and 1998 he recorded some tracks which were never released. Among them, an instrumental track called Vortex that he wrote and produced himself. It was a hard house anthem with a strong and bouncy "rave" style. There was also a track called 100's Of UFO's and a '97 version of Love Is Everywhere, which was a faster rave version of the 1992 hit single.

In 1998, he teamed with Deniece Dickson, a beautiful vocalist who had already provided the main vocals for many leading bands. Together they re-recorded Summertime, which reached #9 in the USA Club Charts. They toured with 2 dancers, Lesley and Jenna.

They were pretty succesful in the UK, they have received tremendous praise from Club and Radio DJ's who have heard their new tracks and they are attracting a lot of attention from the Continent and the USA. With Deniece, Cicero recorded some tracks which were finally never released : Night Train (a europop track), Wish (Version 2), Please Stay (a romantic song), Saturday Night (a disco track)

More about Cicero himself... His nickname is Cicero Kid. He has two older brothers, Michael and Steven. His parents are divorced. His father owns a barber shop in US. His mother now re-married lives in Livingston, Scotland. He has aYorkshire terrier called Mitzi and two goldfish, George and Mildred. He qualified in O level Art, O level Craft and Design. His favourite music group is Depeche Mode : "I've always liked electronic music" he explains. His favourite food is made of Kit-Kats and spaghetti (he hates brussel sprouts). He likes drinking chocolate milkshake. His teenage idol was Starsky from Starsky and Hutch. His favourite colour is black. His favourtie moive is Silence Of The Lambs, he likes Tom Cruise and Julia Roberts. He supports the Heart Of Midlothian (Hearts) Football Team. His lucky number is 7. He describes himself as being quiet, shy, sensitive, but alsa a party animal .

Listen to Cicero on Radio Euro Classic, the eurodance radio