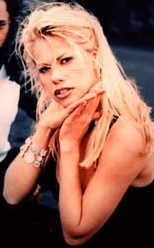 10/09/2001 : Hot news about Jeanette Christensen aka Jeanette Meier ! She released a solo single under the stage name Jeane. The title is Whenever We Kiss.

Born Jeanette Meier in October 5th 1973 in Dielsdorf, Switzerland, in a very musical family. She is 1,70 m tall, blond-haired, and her eyes are green-blue. She practiced accordion, then learned how to play drums. She even created her own band, called The Cry. Then she did some hairdressing studies, and worked in the parental company as a driver.

Her favourite animal is the tiger. Her favourite films are Walt-Disney films. She loves listening to all the musics she hears on the radio, especially Conner Reeves, Dakota Moon, Roachford, Richie Sambora, Amanda Marshall and Tina Arena. Her favourite colours are red, green and black. She loves swimming. Her favourite food is Chinese, she also likes eating spaghetti and the pizzas of her parents' restaurant. She usually drinks coca, mineral water with lemon, or rose wine.

She was a rebel teenager. In May 1990, as she was only 17, she got caught in a fight and was stabbed, she survived by miracle. Afterwards, she decided to get baptised. She worked as a hairdresser for a while. In 1995, she competed to become Miss Schweiz, reached the finals, but did not win.

Frontlady and female vocalist of E-Rotic since 1996, she actually began to sing for the project in 1999 (but according to rumors, she kept on lipsyncing, apart from her live appearance at German Eurovision preselections).

In May 2001 she decided to leave the E-Rotic project to start a solo-carrer under the name of Jeane. The first single to be released was entitled Whenever We Kiss, produced by Christian Raps for Time Tools and Pink Publishing. Guitars were played by Dominik Decker, backgrounds vocals were done by Phil Barnes and Dorothea Becker. It was recorded and mixed at Time Tools Studios, in Hannover. She was said to be already working on her first album. But the single was not a success...

She became a moderator on the private channel Star-TV, presenting during 2 years a very hot TV show entitled... "E-rotic".

2002 : according to rumors, Jeanette was back at Bros-Music. David Brandes was said to be writing songs for her own solo project. But nothing came out.

In 2003, after meeting him at a Sylvester-party, she got married with pilot Patrick Macchi, memberof the religous movement ICF-Christen, got struck by faith and is now named Jeanette Macchi-Meier. The couple lives in Jeanette's parents house. She studied the bible during 2 years, then started presenting a religious broadcast called "Fenster zum Sonntag" on SF2. She says that it brings her much more satisfaction that her previous jobs. In 2006, she gave birth to her first baby.

2007 : in May, she contributed to the "A Star is worn" event. In September, she appeared at the premiere of the show Afrika! Afrika! with her husband.

2012 : in August, she preseneted her last Fenster zum Sonntag show. She immigrated with her sons Aaron and Elio to Dubai, to follow her husband who works for Emirates airlines company.

Thanks to Sascha Busch