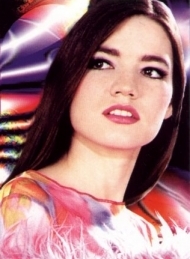 Cherry Moon was a French project produced by Pascal Henninot and Bertrand de Carey (B. Carrouée alias DJ Bertrand, who used to be a DJ on the French radio Skyrock). Take it Easy was released under MCA, Everybody Get Down under Joker Music - Musidisc France. The producers also stand behind the project Pussy, D:mention (You're No Good, released in 1995 under BMG France) and DJ Oscar (We will be Free, an eurotrance song sounding a little similar to La Vache by Milk Inc and Encore Une Fois by Sash). They also did remixes for Abyale (The Snooker) and Jordy.

Female vocalist Jennifer Jordan was born in Texas and was singing in a jazz-pop band, The Speak Easy. She was introduced to Bertrand de Carey by Pascal Henninot.

Bertrand de Carey kept awful memories of their collaboration with Cherry Moon. "My collaborator had told me : I found a great name for the group, we'll call it Cherry Moon. As for me, I did not know the existence of the Belgian club, nor of the Cherrymoon Trax project (a hard trance project whic just had scored a big hit with their single The House Of House), so I replied : OK, congratulations, you found a name that sounds greats". This is when people started asking him : "Is that a new Cherrymoon Trax single ?" that he understood this name would bring them troubles.

"Cherry Moon was refused by every label, but MCA and Christian de Tarlé who had just founded it", he explained years later on a forum. "Cherry Moon was manipulated by her omnipresent husband, and by the crook who owned the label Joker", he remembers. "They figured out they were getting spoliated, whereas this contract was excellent, given the fact that she was a total beginner". Because the single did not sell well, even if it was featured on many compilation, Cherry Moon sued her producers' team. The label tried to recuperate her by making the signing of Everybody Get Down under Sony Dance Pool fail. Everybody Get Down was finally released in Germany, but the project name had to be changed in a rush to Crazy Moon because Cherrymoon Trax was already quite well-known there.

The demo of a featuring by Fred Quarato entitled The Boss was also recorded but never released. After a dream dance solo single entitled Flying Over The Sun in 1996, Jennifer Jordan wanted to change her music style again. She met Viché de Vince and together they founded pop-rock band Mary Modified. She still lives in Paris

Thanks to Ulrich Valtat, Nico and Klems