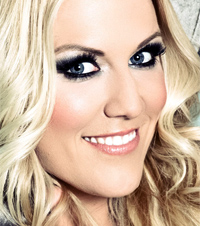 30/03/2020 : Cascada released a Remix EP 2020 including new remixes for Miracle and A Neverending Dream. Nathalie Horler has been tested positive to covid-19 and is currently recovering from the disease.

21/08/2019 : Discover the videoclip for Cascada's new single Like The Way I Do. It was shot last month in in Kameha Grand Bonn, Germany and produced by Al Aire.

04/08/2018 : A remix of Cascada's Everytime We Touch by Hardwell & Maurice West Remix will be released on August 6th.

The music group Cascada is comprised of singer Natalie Horler and two German DJ/producers Yanou and DJ Manian. They gained worldwide recognition with their hit single Everytime We Touch. Natalie (often referred to as "Nat") was born in Bonn, Germany to English parents, on September 23rd, 1981. Due to the very English lifestyle her family lived, she learned both fluent German and English.

The project was originally named "Cascade", but was changed to "Cascada" due to legal conflicts. The name "Cascade" can be found on the first edition CDs and records of Miracle put out by the group by their record label at the time, Andorfine, but this error was soon corrected and the single was re-released under the Cascada name with new cover art. The original versions are now out of stock and production, and may very well be considered a piece of history in the long run. Cascada means "waterfall" in Spanish.

Yanou and DJ Manian create the beats and melodies that power Cascada's tracks. Another project that that Yanou, DJ Manian, and Natalie have worked on together is the "Siria" side-project, which spawned the singles Endless Summer and I Will Believe It.

Cascada's work includes Miracle, Bad Boy, Everytime We Touch, How Do You Do!, and countless remixes. How Do You Do!, a cover of the 1992 Roxette song, was released on November 19th, 2005. Robbins Entertainment released the album Everytime We Touch in the USA on February 21st, 2006. The album featured 14 diverse cuts, as well as covers of Savage Garden's Truly Madly Deeply and Kim Wilde's Kids In America (already covered by SEX Appeal).

The music video for Everytime We Touch could be seen on the Robbins Entertainment web site. The music video depicts Natalie in a library trying to loosen up her uptight work-aholic boyfriend, who is the librarian. At first Natalie creates quite a mess and ruckus in the library and causes distress among many of its readers, who eventually join Natalie and start to dance on top of tables. The music video was released in February 2006. By March 22nd, 2006 the video was in the Top 20 videos for the United States at Yahoo.com.

DJ Manian announced on his official website that the follow-up in Europe to How Do You Do would be A Neverending Dream. The next USA single was a new mix of Miracle, released for radio airplay on May 9, 2006

In 2006 too, Cascada has been busy touring America as well as Austria, Ireland and Germany. A part of the tour had to be cancelled in February because Natalie injured her feet.

At the end of September, their song Ready For Love entered the Hungarian charts directly at #6. Cascada's new single in the UK was entitled Truly Madly Deeply, a Savage Garden cover. A remix album was in the stores in November

Then Everytime We Touch was re-released in Germany, as vinyl in December, then as maxi in January 2007. Another remix album, this time containing version by Klubbingman or the Real Booty Babes, was released in March.

2007 : After its success in England, France and the Netherlands, Cascada released Miracle in Germany.

Cascada's second album was entitled Perfect Day, full of excellent dance and hands-up tracks just like the first album. The tracks Endless Summer and I Will Believe It were previously recorded by Natalie Horler and DJ Manian under the name Siria, therefore they should not be included in the US version of the album. According to rumors, and due to licensing problems, the tracks Sk8er Boi and Just Like A Pill could not appear on the US version either, replaced by 3 brand new tracks : Faded, Holiday and Dream On Dreamer.

The first single taken from it was What Hurts The Most (a cover of a Mark Wills song). In November, Cascada won the World Music Award for best-selling German artist. In December, Last Christmas was released only as mp3 on legal download portals.

2008 : The follow-up single is called What Do You Want From Me (it was at first speculated to be called Tell Me Why). Cascada is among the nominees of the European Border Breaker Awards at Cannes Midem on 27th January 2008. The new album was planned for release in France from February 11th, but was finally postponed.

Cascada is nominated in 2 categories (Best HiNRG/Euro and Best Dance Artist solo) at the International Dance Music Awards which will take place on March 27th 2008.

In December, Cascada released in the UK a new version of her album Perfect Day. Entitled Perfect Day - Platinum Edition, it includes a DVD with her live at Clubland 2008. Another DVD is planned for release in 2009, it should contain a concert from the Perfect Day Tour 2008, shot in Manchester. On November 7th, the classical version of Perfect Day album was released in the Netherlands.

2009 : Cascada's new single was entitled Evacuate The Dancefloor. It was released on 29th June (along with a videoclip shot in Los Angeles), with the album of the same name to follow 6th July. In spite of the real change from the usual handsup style, it was quite successful.

Cascada's next single from the new album was entitled Dangerous, to be released in the UK and Ireland only. She also launched an unplugged version of her single Evacuate the Dancefloor. The maxi CD was released official on 4th September. In October, she released in Germany a single called Fever.

2010 : In February, the video for her new single Pyromania was released. In May, Cascada won the Comet award for best female artist. The new single was entitled Night Nurse. In November, Natalie had to cancel some live appearances because she underwent a vocal chords sugery and was not allowed to speak during several weeks