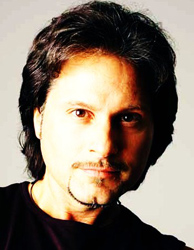 30/07/2018 : T.F.C. is a project created by Alec Tenaglia, Carl Fanini and Cinols from their names' first letters. Their new single is entitled Miracles, featuring vocals by Carl.

Carl Fanini is more well-known for being East Side Beat's and Clubhouse's singer.

Born in New York, he lived his childhood in Queens and already in his young age he became influenced by Black Soul Music. At the age of 12 he moved to Italy whereas at the age of 15 he started his singing career performing in various bands all around the Italian clubs and squares.

In 1991 he became East Side Beat's singer and together they released the debut single Ride Like The Wind : a big hit with over a million copies sold worldwide, reaching #1 in France and in the U.K. where he achieved his first silver record for more than 200,000 copies sold in the british territory, #1 in the European sales chart featuring in the most important BBC TV shows (Top of the Pops, Hitman and her, The word), French (Dimanche Martin) and Spanish TV (La quinta marcia). He finally went on tour for about 2 years singing in the best European clubs. Their debut album, also contained a ballad, My Girl, that again went #1 in France.

In 1993 Carl joined another dance project : Clubhouse. Light My Fire became #7 in the UK sales charts. Living In The Sunshine was another success, followed by a tour in England, Scotland and Ireland. In 1995 Nowhere Land granted Carl a huge success in the italian pop-dance scene. Carl starred in Albertino's Deejay Time, he performed live at the Festivalbar in Lignano Sabbiadoro, took part of Non e' la rai and Mio capitano.

In 1997 he released with Music Mind Disco Fever, a 70s sound type single, that sold more than 15,000 copies in Italy only. The new millennium has added further success to Carl's career thanks to singles such as I'm In Love Again, I Could Be and The Colour Of Your Love.

But in 2002 a new released single hit the club and radio charts: a cover version of John Miles- Music featuring a collaboration with Gabry Ponte and Fargetta from Radio Deejay.

2006 : Carl contributed to 3 new singles part of Mauro Picotto's double CD album Megalounge : Cry, Seek The Answer and Save Me. In the meantime Carl Fanini has been performing live once again in the Italian and european clubs with his band Roof Garden, singing soul and RnB.

Thanks to DJ Marto Aida and Abelito
Carl Fanini on Myspace

Listen to Carl on Radio Euro Classic, the eurodance radio