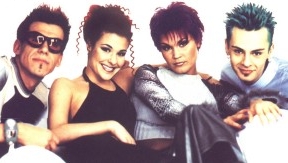 25/12/2019 : Discover the videoclip for Caramella Girls' new single Wish Upon A Star (Thanks to Eurodance Magazine)

10/02/2019 : Caramella Girls released a new single for Valentine, a ballad entitled How Can You Say Goodbye.

Caramell was formed by singers Katia Löfgren and Malin Sundström and producers Jorge "Vasco" Vasconcelo and Juha "Millboy" Myllylä. They sing in Swedish.

Vasconcelo was also writing e.g. La Cream's You and Dr Alban's This Time I'm Free. Jorge decided to establish a studio of his own in Västerås and left Dr. Records. The guys met Malin and Katia in November 1998 in a karaoke bar in Stockholm. Caramell's first singles Om Du Var Min and cover Efter Plugget were quite big hits in Sweden. Band's debut album Gott Och Blandat was released in August in 1999. From the album has been released as a single also Jag Ser På Dig in September in 1999. The last single to be released by this project was the very powerful Explodera. There are still some interesting euro tracks that can be found on the album, such as Kom Och Ta Mig (Come With Me), Telefon and Vingar (Wings).

2000 : they contributed to welfare compilation Barn 2000 to help raise money for Rädda Barnen (Save The Children).

2006 : DJ Speedycake remixed Caramelldansen in a speeded up way. It was combined with a Flash animation loop showing 2 characters of the Japanese visual novel Popotan, Mai and Mii, doing a hip swing dance with their hands over their heads imitating rabbit ears. The result, also named Uma Uma Dance, went viral on the internet and success was incredible...

2008 : it was said the Caramell were currently very busy in the studio working on their new album, but it is not known who will be the members. Malin Sundström did vocals on Dr Alban vs Haddaway I Love The 90s. Katia competed in real-TV Swedish Idol show.

In June, they were #1 on the international sales chart in Japan with Caramelldansen... The following month, they singed a record deal for licening in the UK. In September, Caramelldansen was released in the Netherlands, along with a huge campain scheduled with Nickelodeon. Vasco & Millboy deceded to change the project's name in Caramella Girls.

2010 : in an interview, Katia explained that she was on a maternity leave. She was working as a waitress in the catering industry and she kept on doing music, but for fun. Malin was known under the stage name Maleen or Miss Maleen and she sung rock. Later, she got signed under Scandinavian Label Group, changing again her stage name to Dinah Nah, and her musical style to club/dance.

2011 : first original song under the new project name was Boogie Bam Dance, released under 3 languages. On the sleeve, 3 manga girls (Mindy, Verá and Nadine). Lead vocals were done by Racheal Alicost, helped by Lucky McSozzen and Karin Ellis. Meanwhile, Malin released a solo single entitled I Am (Dinah Nah). Another single entitled Like You is planned.

2013 : in January, Caramell released their new single We Love To Party. Then in December came Get The Gold.