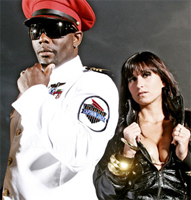 10/11/2019 : A remix package for current Captain Jack & Fun Factory single Change will be out on November 15yh

04/11/2019 : Discover the videoclip for Captain Jack & Fun Factory's new single Change. It was directed by Tom Dannenberg and produced by Castlewood Media.

29/10/2019 : Captain Jack unveiled a short teaser of their forthcoming collaboration with Fun Factory.

20/10/2019 : Captain Jack teamed with Fun Factory to record single Change, to be released on November 1st. Music video was made by Tom Dannenberg (Castlewood Media)

Liza, Franky and the two producers Niebergall, Richard Witte knew each other from Frankfurt (Germany). Franky remembered from his earlier days during his time in the army that drill commands had something quite specific about it. He talked about it with Udo, and he produced a track with sharp dance beat. That's how everything started.

The concept of Captain Jack was quite original : Franky Gee (the rapper) and Liza Da Costa (the first female vocalist) were performing in army uniform. The idea of the hat Franky wore comes from a mix of the caps of the Russian and American armies. The design was inspired of the US-Marines, the color came from the Red Army.

In spite of attire, Captain Jack was far from being a militarist group. They sung about love and peace, with sound of army drill commands and a nice dance beat. They explained that they were soldiers of a dancefloor and their weapon was groove. They only joked about the real army. "When soldiers are doing drill, they move rhythmically and are very energetic. If you would place them in the dancefloor and start play the music, they would do quite good" they explain. In their opinion, "soldiers are good ravers but they do not know about it". Beside that, Liza simply liked uniforms.

They recorded a song called Dam Dam Dam (which was finally released under project name Fatima), but their first single officially released in 1995 was Captain Jack. At that time, Franky was not performing for the project, only writing lyrics. One of his friends Durban was credited for performing the raps and he was also on stage. With the group were three cute dancers : Yvonne, Sandra and Sabine.

In December of 1995 Durban left, and Franky decided to start performing. He did the raps on Drill Instructor which was released in March 1996. This song as well as Captain Jack were in their first album The Mission, out one month earlier. Captain Jack did an extensive tournee in Germany in the Summer of 1996, in which they promoted their third single Soldier, Soldier. Captain Jack and Drill Instructor were covered by SAIFAM project The General.

In the beginning of 1997 they released the new single Together And Forever that appeared on their second album released in March 1997, entitled Operation Dance. Followed the Madonna cover-song Holiday then the track Another One Bites The Dust, another cover-song (featured on Queen Dance Traxx compilation). Album track Secret Agent was also released as a single, but only in Japan.

1999 : Captain Jack came back with a new single Dream A Dream and a new female singer : Maria Lucia 'Maloy' Lozanes (22 years old). Among other musical experiences, Maria had previously done some backing vocals for the project Le Click. Eric Sneo joined the producers team. Dream A Dream did not have the success expected, anyway they released a second single featuring the Gypsy Kings : Get Up, second pre-release from the forthcoming new album The Captain's Revenge. The only performance together worldwide, took place on the the 17th July 1999 on the biggest German TV-show "Wetten, dass..." in the bullfight arena in Mallorca. Only You was the next single to be released.

2000 : Maloy left the group and was replaced by a new singer called Illi Love (aka Ilka-Anna-Antonia Traue). Meanwhile Captain Jack's carreer kept on in Japan, an album entitled Top Secret was released, with a single entitled Hi-Ho (coming with another track of the album Oh La La La). It was later revealed that Illi was only a lipsyncer, real vocals belonged to Dunja Koppenhofer who was credited as a background singer.

2001 : after over 5 millions CDs sold and 19 gold and platinum in whole Europe, Captain Jack were back once again ! Iko Iko was the first single to be released from the forthcoming album Top Secret. This album was at first planned for June. The videoclip of the new single was shot in Mallorca. The second single from the forthcoming album was Say Captain Say Wot. The album Top Secret was finally released but did not have that much success, it even failed enetering the Top 100. Meanwhile, during the summer, a Best Of album was released in Japan.

2002 : Captain Jack released a single duo with DJ Ötzi. They could be seen at the Apres-Ski Hits broadcast on RTL 2. The single did well in the charts. According to the official website, Captain Jack was already working on a new album called Party-Warriors. In July another single was released, called Give It Up. During the summer 2002 Franky escaped from a car accident and during his recovery wrote a book : RATTS (an action thriller about an anti-terrorism organisation).

2003 : a new single was release in February it was called Centerfold. The next album Party Warriors was first released in Japan in December 2002. It contained 11 tracks plus 6 bonus tracks. Then it was released in Europe in March 2003.

In Summer 2003 Captain Jack released their new single Viva La Vida, as well as Franky's book. In October, Franky recorded a song with another Cuban artist : Roberto Blanco. The song was entitled Ein Bisschen Spass Muss Sein (We wanna have some fun). It was featured on some DanceDanceRevolution compilation.

Illi Love got a role in the TV-serie Ein Fall für Zwei. She also played in Der kleine Zauberer and Verbotene Liebe, did a advert spot for the Lufthansa and another one for the Dresdner Bank-Spot, in collaboration with Günter Netzer.

2004 : Franky and Roberto appeared live on the RTL-II broadcast Apres-Ski Hits 2004. In March, they released their new single, called Miss Ibiza. It contained a B-side which is a cover of the old hit Blame It On The Boogie.

2005 : Illi Love was replaced by Sunny/Sabrina (real name : Sabine Repas). In June, after a 6 months tour, Captain Jack presented his new single Capitano during the TV show ZDF Fernsehgarten. Franky was working on a new album, and also busy writing a second roman. The title would be Silent Death.

2006 : On the 17th of October, Franky collapsed on monday at a party in Palma de Mallorca. He was taken to the hospital with the suspicion of stroke. He already had one 3 years before. In the night to friday 21st October, he fell into eternal sleep without ever regaining his consciousness, according to his ex-wife Daniela Schaefer.

Franky Gee's son took the alias "CJ Jr." to start his musical carreer. He released June 23, 2006 his first title called I Love Reggaeton (a cover of Joan Jett's I Love Rock'n'Roll), from his upcoming album Mama Ines. The future album will include songs in the reggaeton style (which was the style his dad had chosen for his first releases), as well as the song I Miss You, a slow rap in which Junior describes his feelings about losing his father.

2007 : Captain Jack are back with 2 new members called Bruce Lacy (born 20th April 1963 in Albuquerque, from a father who was a Jazz musician) and Jamie Lee (real name : Nadja Biereth). They started a tour in Germany. Some new songs were revealed in September : I Got You Rock and U Push It Up. The new album would be entitled Mission Completed, the style is now closer to RnB...

2008 : the new single is entitled Turkish Bazar, and it's not eurodance.

2009 : a new album called Back to the 90's was released. With the cooperation of Seat cars, they performed a following promotion tour throughout Germany on the ship "Ibiza Island". The first single to be taken from this album was announced to be Captain Jack 2009. Some unreleased Captain Jack tracks were digitally released on Juno Records in August and November, such as Falling In Love With You. Franky Gee's Wolly Bully was also re-released as Captain Jack. The new Captain Jack vocalist ws called Laura Pozo Martin (she took part to the 4th season of the reality show DSDS).

2010 : Captain Jack released on May 14th a very nice dance track for World Soccer Championship entitled Deutschland schiess ein Tor. The same month, they shot the videoclip in Mallorca. The title of their next single will be People Like To Party, from the forthcoming album Back to the Dancefloor. The album will feature remixes of their biggest hits, as well as new tracks in the style of the 90s. Both were planned for September but they were postponed.

2011 : In April, they released their new album Back To The Dancefloor. In December Laura Martin was among the candidates on real-TV show The Voice Of Germany. The same month they released a new single entitled Saturday Night, an amazing eurodance track reminding of La Bouche and Culture Beat. Another single followed just for Christmas, a ballad entitled I Was A Fool.

2012 : they released their new single We Will Rock You on April 20th. The single included a B-side entitled Free. In December, Laura Martin left Captain Jack, and was replaced by a new vocalist called Michelle Stanley.

2013 : In May, Captain Jack released a new album entitled 90's Mega Party. They also released a 2013 of their hit Give it Up along with a videoclip shot in Berlin in Club Goya.

2018 : Captain Jack released a Cheeky Radiomix 2019 of their song Dream A Dream specially for their shuffle- and jumpstyle fans in The Netherlands.