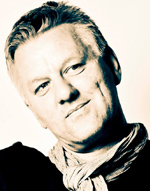 20/03/2018 : Help former Culture Beat and ATC songwriter Frank Bülow win the chance to get a recording session in L.A. by voting for his video

02/11/2014 : Frank Bülow published a videoclip for his ballad Keine Tränen mehr, from his new album Das Neuste released this month.

Frank Bülow is a producer, remixer and songwriter. He contributed to many eurodance projects such as Culture Beat, Nina and Up 2 Date. As a solo artist he released some singles : It's All Nike as Nike in 1983, Secret Times / Flash & Pain as Few Boys in 1985, Einmal / Der Bülow in 1994 and Tears in 1997 under his real name. An album was also recorded, only released as promo : Back To My Basics.

Frank's passion for music started when his grand dad Herbert Goerner (classical composer and orchester chief) offered him an orange table organ in 1972... His musical career began in 1979 when, aged of 12 years, he played for his class during the museum visits travels.

In 1983, at the age of 16, he signed his first contract with a records company. His first single It's All Nike, produced by Kurt Hauenstein (Supermax), was released. In 1984 a second single was out, called Secret Times, under a new scene name. He sold about 20 000 maxi singles. Secret Times was produced by Michael Münzing, who worked at this time as a DJ at the Dorian Gray / Frank air haven club, and who later would become the producer of Snap.

Between 1985 and 1990 Frank built up a solid experience in studio as collaborator of the songwriter and musician Ken Taylor (today Peter Maffay Volume). He worked on a few tracks and demo productions.

In 1991 he started collaborating with Stephan Remmlen on a few projects. In 1993 he signed a contract with Ariola in Munchen. Robert Ponger (who also contributed to the 2 first LPs of Falco) produced his single Einmal. It was massively played on the radio.

In 1995 he started collaborating with Culture Beat team. He wrote 6 songs of the album Inside Out and remixed 4 others. He spent the next year on a European tour with Culture Beat as guitarist and choir singer. Between 1996 and 1998 he collaborated with the records company Get Into Magic / Warner. This is how he wrote Rhythm Of Love for Nina, and Memories for Lona Dee. He also wrote Don't Break This Heart for Universal Denmark's project Camilot.

In 1998 he wrote the lyrics of Culture Beat's single Rendez-Vous. The single became a radio hit, staying 10 weeks in the Airplay Charts Top Ten. It was among the 20 most played tracks of the year 1998. In Austria the single entered the Top 40 Airplay Charts in February 1999, and it is still a classic.

In 1999 he started working with Alex Christensen as co-compositor and choir-singer. He wrote and contributed to Thinking Of You, the third ATC single . The same year he created his own publishing company "Bülow songs" with BMG.

In 2000 he published his first artist : Marianne Rosenberg with the song Wieder Da. The single was very succesful and climbed at the top od German charts. He also started a collaboration with Stefan Benz and DJ Heinz Felber. His voice was featured on Markus album, as well on a single of Enzo and of Marie-Annett (from Fun Factory). He also appeared on some Nosie Katzmann productions (GIL, Bastian Raagas)

The same year, during the Spring, Frank started working on his debut-album Back To My Basics. The album was recorded in collaboration with Peter "Tambo" from Berlin, and completed in September.

In 2001 Frank started working on the PC game Global Hero, dedicated to all music lovers. He also worked with the new artists N. Jean, Salazar and Anyway.

During the year 2002 he wrote the hymn of his former soccer associal Darmstadt 98. The song ranked among the Top Ten of the local listeners chart.

In 2003 his group called Frank Bülow & The Local Heroes did a live appearance in July for the Open Air Konzerts at the Darmstädter Böllenfalltor. He started collaborating with the programmer, arranger & producer Marco Lehmann. He composed with DJ Heinz Felber a song called Sailing Away. He also composed for ZYX compilation Latino Hits a Spanish version of Don't Break My Heart Again, re-entitled No Partas Mi Corazon.