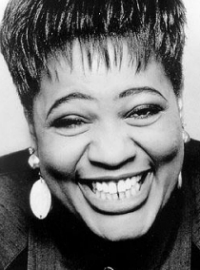 29/11/2012 : Jocelyn Brown recorded My Christmas EP with Melba Moore, Carleen Anderson and Russell Watson. It will be soon digitally released on iTunes.

17/12/2010 : Brown Jocelyn will be touring with the music project called Allstars Collective. (Thanks to Tavi Meran)

Jocelyn Lorette Brown was born in Kingston, North Carolina in November 25th, 1950 from a musical family. Here is how she describes herself : "Jocelyn Brown's a singer. A black woman from North Carolina, migrated from there to New York City and from there to London. Who has a background of Gospel history, came through with contemporary music through my aunt Barbara Gaskin or Barbara Roy. Educated with music through being a background singer and also through my family who are also ministral singers. On the professional side, more so on doing background work and doing a lot of studio work. She's a mother of three children. She's a woman that stands firmly on her feet about all things. She tries to understand all things. She's open-minded, very tender. And my love of God is wonderful, you know, I love the Lord of all my heart."

She began her career singing with groups like Kleeer, Machine, Disco Tex & the Sex-O-Lettes and Change (her voice is featured on 3 tracks : A Lover's Holiday, It's A Girl's Affair and Angel In My Pocket. She was credited as Jocelyn Shaw, which was her married name). Then she became the lead vocalist for the project Inner Life, back in 1979. That's how she released hits like Ain't No Mountain High Enough, Moment Of My Life, I Like It Like That, Make It Last Forever or I'm Caught Up (In A One Night Love Affair). She also took part to Musique's Push Push In The Bush (with Christine Wiltshire) and Keep On Jumpin. Musique's producer/cowriter Patrick Adams said : "Jocelyn Brown and Christine Wiltshire were the two greatest living vocalists to me. Christine had been in Luther Vandross' original group on Cotillion, and she introduced me to Jocelyn. All through my life, Jocelyn has been like a charm for me. Jocelyn had the strength and gospel background, and Christine had the refinement and precision to make for some really slick backgrounds. Together, with whatever third person they brought to the party, it was a gas." During the eighties she kept on contributing to disco and soul projects such as Chic (Soup For One), George Benson (Give Me The Night), Bernard Edwards (for instance his album Glad To Know You), Candido (Jingo), Manu Dibango (Soul Mokassa LP), Salsoul Orchestra's (Christmas Jollies II), Culture Club and Janis Ian. She also did backing vocals for Janis Joplin, John Lennon, Roberta Flack, Michael Jackson, Bruce Springsteen, Mick Jagger, Tom Jones, Diana Ross, Patti Austin, Bette Midler, Michael Bolton, Lou Reed, Debbie Harry, Billy Idol and Steve Winwood.

Later in the 80's she worked with Jellybean on many singles such as Love's Gonna Get You. Afterwards she discovered that her voice had been sampled from this song in Snap's song The Power. "I thought I had been cheated. That I had been ripped of. That no one even cared about the fact that, how I was the singer there and no one paid me. No one respected the fact that they got it from there. No one acknowledged me or anything, it was very painful, it was... it's very hard to know that everyone else was living of that, but me. It's still to this day - it's the same exact way. The very serious rights. It was only because Jellybean gave the rights and didn't respect anybody else, and he knows that." Jocelyn explains. She also admits she is one of the most sampled female voices in the businesss. The song Love's Gonna Get You was also the base for Bizarre Inc.'s song I'm Gonna Get You in 1992. This tune was credited Bizarre Inc. feat. Angie Brown (who is not a relative of Jocelyn's). It was also sampled by Photon Inc. on Generate Power in 1991, by DJ Pierre and Roy Davis Jr, which appeared on The Early Years compilation of Strictly Rhythm, by Moby on Go (Instinct, 1991) with "Yeeeeaaaaah!", by Deputy Of Love on Deputy Of Love the same year, by Sophia's Running So Hard (in 1992), and by Cool N' Cat in Why Waste Your Time.

Her recent contributions to dance artists and projects singles are numerous : she took part to Melodie MC's last album and DJ Bobo's World In Motion. She released a duo with her friend Kym Mazelle (No More Tears). There was also Incognito's Always There which reached # 6 in the UK charts in 1991s. Jocelyn worked with Incognito again after that on their 1999 album. She has worked a lot with Masters At Work in both M.A.W. records (such as Can't Stop The Rhythm in 1993) and in their NuYorican Soul project. Another big hit was Right Said Fred's Don't Talk, Just Kiss which reached # 3 in the UK charts. In 1995, the diva teamed up with the group Serious to record two albums for the Japanese market : Jocelyn's Classic R&B Mastercuts and Jocelyn's Classic Reggae Mastercuts. On the 3rd November 1997 she teamed up which the Kama Sutra project to release a single entitled Happiness. Other dance acts she's been singing with are Alyson Williams, Karisma, Off Shore, Da Mob (in 1998), Motiv 8, Jestofunk, Jamestown and AK Soul (Free, Show You Love in 1998 which she also co-wrote).

From the beginning of her carreer, she considers she has taken part to more than 200 songs. Brown is one of the most "gay-friendly" divas around, with frequent appearances in night-clubs, the Gay Pride celebrations in London and also at the Manchester Mardi Gras festival. Jocelyn also appeared on Gaytime TV in the "Torchsong" spot.

As for her solo carreer, she released many albums. She wrote her massive 1984 hit Somebody Else's Guy together with her sister, Annette Brown (and re-released it in 1998). Jocelyn also sang 2 songs on Disney's soundtrack for the animated movie Hercules : The Gospel Truth and A Star Is Born. She continues to write songs with her sister Annette, who also helps manage her family members' creative activities.

Jocelyn created her own label, called Itsallgood Music. She appeared on many jingles for brands such as McDonalds, Burger King, KFC, Sprite, Coca Cola, Pepsi, Maxwell, American Express just to name a few.

2002 : her voice was featured by the project Risque for the single Black Skin and by Cassius for the very succesful hit I'm A Woman.

2004 : in December she recorded with Tatjana Orffé the single Black Skin Blue Eyed Boys. Her voice was featured by Cerrone on Hooked On You, then a few mothns later on You Are The One.

2006 : in May, Jocelyn released an album gathering many previously unreleased tracks.

2007 : Jocelyn appeared in the real-TV show "Just the Two Of Us", starting January 2nd on BBC1. The concept : nine celebrities will be singing for survival when they are paired with some of the world's biggest recording stars to perform live every night.