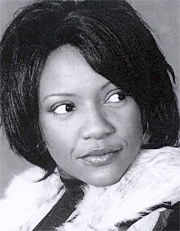 27/02/2018 : Angie Brown' vocals were featured by Marc Barnes on forthcoming single Be Strong.

06/11/2017 : A second remixes package for The Miami Collective feat. Angie Brown - Never Gonna Give Up was released

13/11/2015 : Angie Brown's vocals were featured on MP's single Soul Fever. They were probably taken from the vocals package available on Samplephonics.

Angie Brown calls herself the original South London Girl as she was born in Clapham. Her parents were both from Kingston, Jamaica and they moved to the UK in the 50s. Her dad was a carpenter and her mum was a nurse. She grew up in Brixton, sung in the choirs at school and appeared in some amateur productions. After she won a contest, she took singing lessons. She began her singing career in the early 1990s, starting out as a freelance singer doing sessions and touring with major names throughout the world.

Angie is a refreshing and gifted vocalist, whose performances have thrilled audiences all over the world. Her voice has been compared to the all-time greats, such as Tina Turner and Aretha Franklin. Ms. Brown's passion during performances has been known to make grown men cry.

Angie's biggest hit to date was in 1992, with a deliciously infectious tune called I'm Gonna Get You which reached #3 in the UK charts in October 1992. Her vocals featured heavily on the track, which was created by 3 young DJs/remixers from Stratford called Bizarre Inc. According to others, the vocals were sampled from Jocelyn Brown's single Love's Gonna Get You. Angie teamed up with Bizarre Inc. again the following year on Took My Love.

Besides performing live Angie has also appeared as a TV personality on many of the top prime time shows across all networks including several childrens programmes along with Good Morning, GMTV, The Lottery, Big Breakfast, Dance Energy, Top of the Pops, Never mind the Buzzcocks, Pyjama Party, Viva La Diva and even stood in as the celebrity weather girl on TFM.

Angie's other big hit was with remixer Steve Rodway, better known as Motiv 8. Their collaboration Rockin' for Myself peaked at #18 in the UK in May 1994. Her voice was also used on some Cappella singles.

In 1995, her voice was featured on Get Ready's single Wild, Wild West.

1997 : Angie started a solo carreer and recorded the single You Got It.

1998 : she did backing vocals on Jocelyn Brown's hit Ain't No Mountain High Enough.

1999 : she was featured on Starshine, a track on Cuba's album Leap Of Faith.

2000 : she contributed to backing vocals on Beneath A Spielberg Sky, a track on Midge Ure's album Move Me. She was also featured on Orange Soul's single Tower Of Love.

2001 : Angie's vocals were featured on Manero - Boogiedown. She same year she did vocals on Stay Away, a track of Homecookin' album Do What U Wanna. She also did backing vocals on Warren Clarke's Over You.

2002 : Angie released a second solo single called Can't Get Enuff. She also contributed to ATFC's single Sleep Talk along with Lisa Millett and to One Track Mind's single Good For You.

2003 : Angie did vocals on Mark Knight - Burning Up. In May, she appeared on Damien J. Carter - Never Say Never. In July, she was on Paul Woolford's - Out Of My Life. She also contributed to U'nique's Reach and to J. Sonic Whatever you dream.

2005 : Angie did vocals on Seamus Haji & Paul Emanuel - Weekend. In December, she was featured on The Miami Collective - Never Gonna Give Up.

2007 : she recorded a cover of the song License To Kill for the compilation Forever Bond.

2010 : Brown Angie recorded a cover of I Say A Little Prayer under Almighty records

2011 : Angie was featured on many house and electro singles this year, such as Peter Gelderblom Exceptional, The Winning Triplet Gold Moon or Martin Wright Forgiveness.

2012 : Angie Brown was featured on Sterling Void & Rhythmic Groove's single Sweet Bit Of Lovin. She also visited Carl Parker's House Preacher and Glassesboys' Open Up. In December, there were rumors about Angie being among the candidates to represent UK at Eurovision Song Contest.

2013 : Angie Brown did vocals on Carl Parker's I Love House Music and Chris Noble's Full Of Love, both out in December.

Thanks to Klems and Zeeteah Massiah