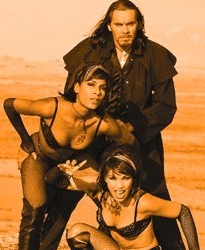 11/05/2018 : Brooklyn Bounce released a package of Satana Remixes of their biggest hits.

04/08/2017 : Brooklyn Bounce released a KC remix packages for their classic The Theme (Of Progressive Attack)

10/06/2017 : New from Brooklyn Bounce, a collaboration with Section 1 entitled Make Us Bounce.

Brooklyn Bounce was created by the two producers, remixers and DJs Matthias Menck and Dennis 'Double M' Bohn (aka DJ Bonebreaker) from Hamburg. Matthias is a qualified audio engineer, operating in his own studio. Dennis is resident DJ at the Kontor, one of the Hamburg's hottest house clubs. It was during a DJ job in the Traxx club in Hamburg that Matthias met Dennis, who was working there as a light jockey.

Following their first meeting in August of 1995, Dennis and Matthias started 'Mental Madness Productions' and scored a chart hit with their first co-production, Singin' In My Mind, by Boyz R Us. Further productions followed, the latest including Mola Adebisi's Shake That Body. The duo had previously done a number of remixes for Solid, Daisy Dee, Kool And The Gang, Bluntfunkers, Scooter, George Krantz and many others. Matthias was also mixing the tracks for one of the top compilations in the world of house, Progressive Attack, on which Dennis and Matthias released some of their own tracks as well under the names Toxilogic, Harmonic Beats, Mental Madness and Dolphin Sound.

For the Progressive Attack 4 recording, the idea of producing a lead track was taken up, culminating in Brooklyn Bounce The Theme (Of Progressive Attack). DJs and purchasers of the compilation were so thrilled by this track that it was decided to release it separately as a single. Within no time, Brooklyn Bounce The Theme (Of Progressive Attack) rose to #6 on the German Dance Charts, #8 in the German singles charts, #37 in France, #40 in Switzerland (where it stayed 12 weeks) and became a club favourite which was followed by an incredible sales chart success.

The second single Get Ready To Bounce debuted at #6 at the beginning of May 1997. It went #95 in the USA, #20 in Sweden, #20 in Finland, #21 in Switzerland, and #16 in Denmark. By now, Brooklyn Bounce had started their conquest of the world with chart successes in France, Scandinavia and many other places.

The first album The Beginning also became a big success. The singles had been backed up by high-budget videos featuring the animated front figure "Abuna E." thereby closing the loop to the Progressive Attack compilation series. During gigs, Brooklyn Bounce was incarnated by Damon, the "Demon" (aka Rene in the US version of the album Restart), who can also be seen in the video, and by the dancers Ulrica Bohn and Maeva Ehoulan, two go-go girls from Hamburg's Traxx club, who also contributed to backing vocals.

Later in 1997 a single called The Real Bass was released. It entered the charts on the 10th october 1997, peaking to #23 in Germany and #44 in Sweden. On the 27th of November came the second album called The Second Attack.

Later Brooklyn Bounce released an album called Re-Mixed Collection which included remixed versions from their previous albums and singles. Then they released the single Canda! in April 1999. It entered the charts on the 21st June 1999, went #56 in Germany and #8 in Denmark.

In July 1999 a 7" Promo called Hack The Planet was recorded. This promo only single contained one track : a Radio Edit. On November 12, 1999 the single Funk U was released. It entered the charts on the 31st January 2000 and went #8 in Denmark. Then came a promo vinyl in September 2000 called Tiempo De La Luna. It featured mixes from Hampenberg and BBS DK, just no name a few.

Their next single was called Bass, Beats, Melody and was released in November 2000. They worked together with the former rapper of Red 5 and have a new female singer. Ulrica left the group because of becoming a mother, and was replaced by Alexandra. The single peaked to #47 in Sweden, to #43 in Switzerland (it stayed in the Swiss charts during 12 weeks), it was more succesful in Austria where it went to position #2.

2001 : they released a single called Born To Bounce. It did not go higher than #94 in Switzerland but peaked to #14 in Austria.

It was followed by a cover of the U 96 hit Club Bizarre. The single peaked to #9 in Austria and #41 in Switzerland and stayed in the Swiss charts during 12 weeks. The second male performer of the group, Damon, left the group : he had become a father last year and he wanted to spend more time with his family.

2002 : the next single to be released was entitled Loud & Proud, released in June. The single did not go higher than #88 in the Swiss charts but peaked to #9 in Austria.

In September took part to the Dance United project, created to help the victims of the floodings in Germany. They released a single called Reach Out on the 30th of September. The remix edition of Bring It Back was released in November.

2003 : Brooklyn Bounce's new single was entitled X2X (We Want More). The videoclip presented the 2 new vocalists (chosen after a broadcasted casting) : Katie Matthew and Noreen Quade. Diablo (formerly from 666 project) was still a part of the group. The single went #33 in Austria. The next album planned for release will be entitled X-pect the Un-X-pected.

2004 : a cover of JX There's Nothing I Won't Do was very confidentielly released. Crazy was the name of the new single (it was a cover of a song initially released by Seal), it entered the German DJ playlist at #17 and went #32 in Austria. X-pect the Un-X-pected was finally released in September, followed in October by X-Pect The Un-X-Pected EP on vinyl.

A DVD entiteld The Early Years was released in December. It gathered the video clips of the singles released between 1996 and 1999, plus a photo gallery and the project's discography. The clips' order in the DVD's menu was wrong. The correct order was actually Get Ready To Bounce, The Real Bass, Contact, Funk U, Take A Ride, The Theme (of progressive attack), The Music's Got Me and Canda.

2005 : a vinyl promo of their new single Sex, Bass & Rock'n'roll was released on 29th September. It contained a Club mix and an Instrumental version. It entered the German Official Dance charts and the official CD maxi release was set to 2nd December. The CD maxi included 6 new mixes, a video, wallpaper and photos.

2008 : a 2008 version of Get Ready To Bounce is about to be released. It will contain remixes by Discotronic, Dream Dance Alliance, Danny Wild, Primax and others...

2009 : Denis Bohn aka DJ Bonebreaker, one of the BB producers, released his third Bounce double CD compilation under the name Brooklyn Bounce DJ. The compilation will also include mixes by DJ Novus (Groove Coverage).

2010 : Brooklyn Bounce teamed with Alex M. & Marc van Damme to release new remixes for their single Crazy. They teamed with DJs from Mars to re-release Club Bizarre with new mixes

2011 : Brooklyn Bounce are back with a collaboration with King Chronic Miss L entitled Cold Rock A Party, to be released on May 20th. Not really the usual style... The following month, they should release a antoher collaboration, this time with Maurizio Gubellini, entitler Bass, Beats & 5 Seconds. This Is How We Rock was the title of Brooklyn Bounce's forthcoming single.